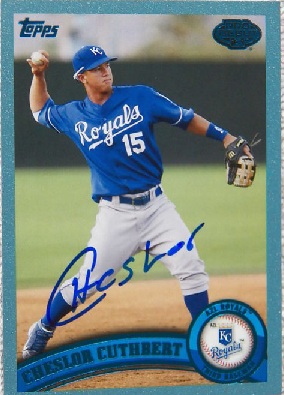 Even with the slump, this is still impressive performance for an 18-year-old prospect in a full-season league, especially a guy from Big Corn Island (population less than 7,000) off the coast of Nicaragua.

The only thing I've heard about the cause of the recent slump is that he looks somewhat tired, which is also not surprising. His walk rate has actually increased during the slump, but his strikeout rate has spiked, too. Scouting reports remain positive about his long-term outlook, focusing on his power potential to all fields and willingness to work on controlling the zone. He's still raw at third base but has made progress cutting down on errors, and has the arm and range to stay there. I rated him a C+ pre-season with a "high risk/high reward" label and I think I will keep that for now.

**A new arrival in the Midwest League is Toronto Blue Jays right-hander Noah Syndergaard, just promoted from the Northwest League. He made his first start on August 24th for Lansing, going five innings, allowing four hits, one walk, and one run, fanning six. Overall this year, between rookie-level Bluefield in the Appy League, Vancouver in the Northwest League, and Lansing, he has a 1.64 ERA with a 65/17 K/BB in 55 innings, 42 hits allowed, and a 1.37 GO/AO.

The number are obviously excellent and the scouting reports are just as good, focusing on his mid-90s heat and nasty curveball, and a better changeup than most 19-year-old pitchers have. I had him as a Grade B- pre-season based on his scouting reports and draft position (first round supplemental out of high school in Texas) and he's at least a Grade B now, possibly a B+ and a strong candidate for the Top 50 pitchers list.