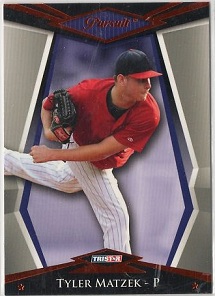 **Colorado Rockies southpaw prospect Tyler Matzek had a terrific start last night for Low-A Asheville, going seven innings against Hagerstown, allowing two hits, two walks, and one run, fanning 13. This was the second start in a row where he's shown both command and stuff; he fanned nine with two walks in seven innings on August 21st. His overall numbers since being demoted from High-A: 4.89 ERA in 11 starts, 43 hits, 72/46 K/BB. The K/IP ratio is terrific.

As you know, the first half of the season was a Hindenbergian disaster for Matzek: 10 starts for High-A Modesto, 33 innings, 34 hits, 37 runs, 46 walks. He still had problems after his initial demotion to Asheville, but has been more effective lately, with a 2.65 ERA and a 42/15 K/BB in 34 innings over his last five starts. He's returned to the mechanics he used in high school, and while we need more data, the early results are promising. There is nothing wrong with him stuff-wise; he just needs to throw strikes, but his pre-demotion mechanics were inhibiting that. One wonders why his mechanics were changed in the first place, but the point is that he's getting them back in synch now.

**A sleeper in the 2011 draft that I've mentioned a few times is lefty Austin Wright, selected in the eighth round by the Phillies from the University of Mississippi. His college performance was mediocre, but in pro ball he's performed quite well, with a 3.38 ERA and a 44/13 K/BB in 35 innings for Williamsport in the NY-P, followed by a 1.80 ERA in 25 innings for Lakewood in the Low-A Sally League, with a 26/7 K/BB, 22 hits, and a 1.39 GO/AO. A big, physical southpaw at 6-4, 235, he has low-90s heat but never truly thrived in college due to command troubles and erratic secondary pitches. He's showing better command as a pro, and his curveball is reportedly working quite well right now. The development of his changeup will determine if he starts or relieves at higher levels.

**Seattle Mariners RHP prospect Jose Campos is blowing away the Northwest League, with a 2.12 ERA and an 82/11 K/BB in 76 innings for Everett, with 61 hits and a 1.58 GO/AO. A Venezuelan signed in 2009, he spent two years in the VSL before making his North American debut this summer. Obviously it is going well statistically, and the scouting reports are solid too, indicating low-to-mid-90s heat (some reports have him touching 100), a curve that's a possible plus pitch down the line, and an erratic but promising changeup. He throws strikes, is 19 years old, and has a good frame at 6-4, 195.  I would give him a Grade B- right now and that could go up to a B depending on what final reports look like. VIDEO HERE.    More VIDEO HERE.

**Right-hander Edwin Carl's statistics in the Pioneer League are amazing (1.36 ERA, 71/3 K/BB in 33 innings, 17 hits, 2.00 GO/AO) and he's starting to get noticed for it, earning a recent mention in Baseball America,
as well as the attention of Royals fans. The general "we need to see him at higher levels" consensus is accurate, of course, given his status as a 23-year-old against younger competition.

As you may know at this point, Carl was an undrafted free agent signed out the University of New Mexico last year. His college numbers in '10 weren't great on the surface (5.12 ERA, 49/23 K/BB in 46 innings, 64 hits), and that probably helped him stay undrafted, but I don't think context was considered enough. The team ERA for New Mexico was 5.40, and his K/IP mark was outstanding for the context in which he was pitching. Kudos to the Royals for giving him a chance, and while the age/competition factor has to make us cautious, he clearly deserves a full shot at higher levels.

Carl isn't a junkballer, working with a 90-94 MPH fastball as well as a respectable curve and changeup. He's stocky at 6-0, 210, but even so, there is no valid reason why this guy wasn't drafted in the first place. Why didn't someone draft him in the 30th or 40th round? The arm strength is there, and his college stats (if properly interpreted) showed the chance for success at higher levels. The fact that arms like this go undrafted never ceases to amaze me, given the large numbers of draft picks teams blow on players who never even sign. The undrafted Brandon Beachy is, of course, the best recent example of this phenomenon.