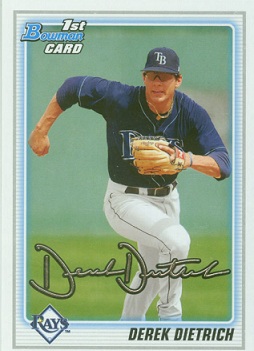 **Tampa Bay Rays prospect Derek Dietrich first came to prominence as part of Houston's disastrous 2007 draft class. He was picked in the third round, the first choice the Astros had that year, but opted to attend Georgia Tech instead. He spent three years in the Yellow Jackets lineup and was picked in the second round by the Rays last June.

Dietrich is hitting .290/.360/.523 this year for Low-A Bowling Green in the Midwest League, with 21 homers, 29 doubles, 36 walks, and 106 strikeouts in 428 at-bats. A left-handed hitter, he has solid power and a virtually even platoon split (.885 OPS vs RHP, .881 vs LHP), although he's benefitted from his home park this year, hitting 16 homers at home but just five on the road. He hasn't had a lot of trouble with Low-A pitching, but scouts remain concerned that he sells his swing out for power and that his approach won't work as well at higher levels. His BB/K/AB ratio lends some credence to this.

He's played shortstop all year, but has made 24 errors and scouts doubt he has the range to play the position regularly in the majors. He could end up at third base or corner outfield, which would increase the pressure on his bat.

**New York Mets prospect Chris Schwinden is having a solid year for Triple-A Buffalo and could receive a promotion for the stretch run. The 25-year-old right-hander has a 3.60 ERA with a 119/44 K/BB in 130 innings, with 115 hits allowed. He's given up 12 homers and has a 0.61 GO/AO ratio. Drafted in the 22nd round in 2008 from Fresno Pacific, Schwinden struggled last year in Double-A (5.56 ERA, 100 hits in 79 innings) but has been more effective this year. His velocity is mediocre (88-90) for a right-hander, but he throws strikes and mixes in a curveball and cutter. He has little margin for error and could be a Quadruple-A type, but there's at least some chance he could develop into a fifth starter or long reliever.

**Seattle Mariners shortstop prospect Brad Miller is off to a fast start in pro ball, 7-for-13 (.538) with two doubles in his first four pro games for Low-A Clinton in the Midwest League. He's fanned three times and hasn't drawn a walk, though of course a four-game sample is essentially meaningless for either good or ill. The second round pick out of Clemson had a 90/78 BB/K in college the last two seasons over 556 plate appearances, and it will be interesting to see if his plate discipline translates well into pro ball. I expect it will eventually.

**One of the most dangerous hitters in the Florida State League this year is Clearwater 1B-DH Darin Ruf, hitting .312/.389/.505 with 15 homers, 38 doubles, 49 walks, and 89 strikeouts in 442 at-bats. These are strong numbers in a league environment that suppresses power and offense in general; he has a virtually even home (.899 OPS)/road (.889 OPS) split so he isn't taking advantage of a friendly home park. A right-handed hitter, he's deadly against left-handed pitching (.371/.455/.595) and has done enough against right-handers (.291/.365/.472) to remain effective overall. Ruf was a 20th round pick in 2009 out of Creighton University in Omaha. I saw him play several times in college, and he does have good bat speed and a feel for the strike zone. The big caveats here are age (he's already 25) and position (right-handed-hitting first basemen have to truly mash to get a chance), but he bears watching as he transitions to Double-A next year.