Prospect of the Day: Kyle Seager, 3B, Seattle Mariners

Share All sharing options for: Prospect of the Day: Kyle Seager, 3B, Seattle Mariners 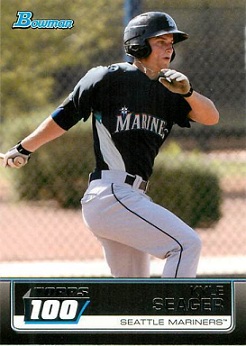 Dustin Ackley isn't the only intriguing young infielder in Seattle. Meet Kyle Seager, just promoted from Triple-A Tacoma. Ackley's college teammate at the University of North Carolina, Seager was an excellent college player and was drafted in the third round in 2009.

Seager is a reliable infielder at both second base and third base. His physical tools are average, but he has quick hands, makes few mistakes, and is fundamentally sound. The Mariners gave him some innings at shortstop this year and he's not terrible there, although his range at that position is limited. He shouldn't play shortstop regularly but having the versatility to sub there in an emergency is helpful. In the majors right now, Seager will play third base with Ackley at second.

While Seager doesn't have the home run power of the typical third baseman, he has solid strike zone judgment, makes contact, and has respectable gap power. His running speed is a tick below average and he can be overaggressive, stealing nine bases but being caught six times this year, but no one ever accuses him of lack of effort and his makeup is a strong suit.

The standard comparison for Seager is Bill Mueller: a third baseman without big power but possessing a solid line drive bat with a good feel for the strike zone. The comparison is apt in my view. Mueller hit .291/.373/.425 in a 1216-game major league career. He wasn't a star but he was solid, and I expect to see similar results from Seager.