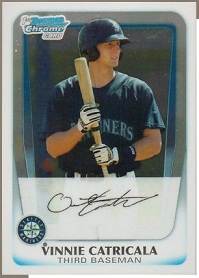 Let's review the Sleeper Alert! list from the2011 book (which you can still order by the way!). Here are the first 15 alphabetically and we will review all 59 players as the week moves forward. I'm including a brief mention for each player of the reasons they were on the list, if it was stats, scouting, intuition, or some combination thereof.

Austin Adams, RHP, Cleveland Indians: 4.16 ERA with an 82/46 K/BB in 80 innings for Double-A Akron, 85 hits allowed. Throws hard, doing OK but command is still an issue. 25 years old. Sleeper rating was based on combination of stats and scouting.

Scottie Allen, RHP, New York Yankees: 7.13 ERA with a 54/27 K/BB in 71 innings combined between High-A Tampa and Low-A Charleston. A horrible season, but at age 20 he has time to rebound. Was rated as sleeper on basis of scouting reports but looks awful right now.

Corey Dickerson, OF, Colorado Rockies: Hitting .288/.374/.613 with 19 homers for Low-A Asheville. Very fine campaign. Age 22. Rating was based on both scouting and stats.

Michael Fiers, RHP, Milwaukee Brewers: 2.54 ERA with 80/20 K/BB in 74 innings, 54 hits combined between Double-A Huntsville and Triple-A Nashville. Pitching very well. 26 years old. Rating based mostly on stats and intuition, I have liked him since he was in college.

Kendry Flores, RHP, San Francisco Giants: 5.13 ERA with 26/10 K/BB in 26 innings for Spokane in Northwest League, 27 hits. Sample small, performance has been better than ERA indicates. 19 years old. Rating was based on both stats and scouting reports.

Mediocre results so far, although Catricala and Dickerson were good calls.