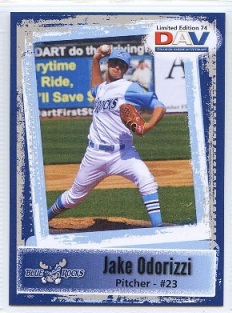 **The Royals finally promoted Jake Odorizzi to Double-A Northwest Arkansas last week. In May, a Royals official joked with me that they were waiting for his K/BB ratio to get to "100 to 15" before promoting him from Wilmington. At least, I thought this was a joke: his K/BB in the Carolina League ended up at 103/22 in 78 innings with 68 hits allowed and a 2.87 ERA. His first start for Northwest Arkansas wasn't bad: five innings, six hits, two runs, two walks, four strikeouts.

Odorizzi's statistical indicators are all positive. He's a strong fly ball pitcher but hasn't given up many homers at the lower levels; we'll see if that remains true but I'm optimistic. He has an impressive 90-95 MPH fastball/plus changeup combination, and the Royals are reportedly happy with the progress he's made with his curveball. The former high school shortstop is also a fine athlete, and his mound presence drew raves in the Carolina League. With injuries and inconsistency plaguing their collection of young arms this year, the Royals are reminded that you can never have too many pitching prospects, and should be quite happy that they were able to pick Odorizzi up in the Greinke deal with the Brewers.

**In the Projectable Rookie Ball Right-Hander Competition, we have Sebastian Vader of the Baltimore Orioles. The 6-4, 175 pounder was an 18th round pick in 2010 from high school in San Marcos, California. He's pitched 16 innings so far for the GCL Orioles, with a 15/3 K/BB, 12 hits, and four runs allowed. Miniscule sample size, obviously, but good results so far. The former high school quarterback is tall, lean, and strong, and could easily gain 10-15 pounds of muscle as he matures. His current fastball is in the 87-90 range but scouts think there is more in there, he throws strikes, and his slider is promising. He's a long way off, but we will watch his career with great interest.

**A year ago, Atlanta Braves southpaw Carlos Perez was impressing scouts with his pitching in the Appalachian League and was eventually named the circuit's Top Prospect by Baseball America.  He's been less impressive for Rome in the South Atlantic League this year, posting a 5.13 ERA in 93 innings, allowing 107 hits, with an 83/38 K/BB ratio. He has a 1.51 GO/AO and has given up just six homers, which matches scouting reports that his fastball works well low in the zone.

Impressions from Sally League observers are very mixed this year. In some starts he's worked at 92-93 MPH and shown a quality changeup and promising, if erratic, breaking ball. In other starts he's been at 88-90 with no command over his secondary pitches. Right-handers are hitting .306 against him, but lefties have trouble at just .218, which fits well with the scouting reports. Perez is just 19 and has plenty of time to refine his game, but I don't think he'll move through the system quite as quickly as anticipated last year.

Swagerty's key pitch is a hard sinker that hits 95-96 in short stretches and works well in the low 90s. His breaking ball is outstanding. He closed in college and relief is his destination in the majors, but the Cardinals used him as a starter early in the year so he could improve his changeup and build up a reservoir of pro experience. He moved to the bullpen in late June and could be moving up to Double-A at any time.