Prospect of the Day: Charlie Blackmon, OF, Colorado Rockies

Share All sharing options for: Prospect of the Day: Charlie Blackmon, OF, Colorado Rockies 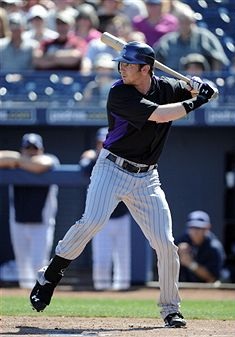 Blackmon is an above-average athlete with plus running speed and a solid throwing arm, though his lack of amateur experience still shows up sometimes in his running and throwing. He's already collected ten assists this year in right field, but has also made four errors. He has above average power in his 6-3, 200 pound frame, and has worked hard to iron out his swing mechanics. His swing was somewhat long when he came into pro ball but is shorter and more consistent now. His plate discipline is average, but he usually makes contact and isn't prone to excessive strikeouts.

Scouts have often seen Blackmon as a good fit as a fourth outfielder, given his speed and ability to play all three outfield positions, but he's developed enough with the bat that he could be a regular. Although I don't think he'll be a star, he should be a productive major leaguer, hitting for average and moderate power, picking up some stolen bases, and holding a roster spot for years to come.