Share All sharing options for: 2011 MLB Draft: Compensation Round Analysis and Opinion 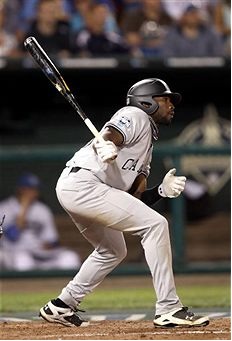 Jackie Bradley Jr says, "My wrist is fine, and I'm happy to be a Red Sock" (Getty)

Here are capsule summaries of the Supplemental round compensation picks, with my opinion of the pick mixed in.

1-34) Nationals: Brian Goodwin, OF, Miami Dade CC: Very toolsy outfielder with good speed, patience at the plate, and moderate power. Needs work on defense but high ceiling. This is a fine pick in my view, as I felt he would be solid late in the first round.

1-35) Blue Jays: Jacob Anderson, OF, Chino HS, Chino CA: Somewhat raw, but the Blue Jays are sold on his power bat from the left side of the plate. Signable away from Pepperdine here. An overdraft by about a round on my board, but the Blue Jays know more about him than I do, and his ceiling is high.

1-36) Red Sox: Henry Owens, LHP, Edison HS, Huntington Beach, CA: Lanky 6-7 strike-thrower with average fastball but outstanding feel for pitching. Nice value here, the Red Sox must be ecstatic they could get him here as he has first round ability.

1-37) Rangers: Zach Cone, OF, Georgia: One of the toolsiest outfielders in the college ranks, but rather raw with the bat. High risk/high reward pick. I am not a big fan of Cone, as I think he's got a good chance to bust, but the Rangers feel his athleticism can be molded. If they are right, it could be a steal.

1-38) Rays: Brandon Martin, SS, Santiago HS, Corona, California: Fast-riser up the draft boards due to his improved hitting and good chance to remain at shortstop. Strikes me as a slight overdraft, but given the lack of high-ceiling shortstops, I can understand why they took the risk.

1-39) Phillies: Larry Greene, OF, Berrian County HS, Nashville, Georgia: Raw prep outfielder with enormous power but may end up as a first baseman or DH if he gets too slow. I am intrigued with Greene's power, but I think there were more balanced picks available. Still, if you REALLY love the guy, and you think he'll be gone later, you pull the trigger. I would have picked Jackie Bradley or Andrew Chafin myself.

1-40) Red Sox: Jackie Bradley, OF, South Carolina: This could be a steal if Bradley can return to the form he showed in 2010. Was it the new college bats or a bad wrist that hurt his numbers? A year ago, if you told the Red Sox they would be able to grab Jackie Bradley in the comp round, I don't think they would have believed you.

1-41) Rays: Tyler Goeddel, 3B, St Francis HS, Mountain View, CA: Good athlete with speed and arm strength, bat will need some development time as he is physically immature. This is one of the high-profile draftees that I don't have a good feel for.

1-42) Rays: Jeff Ames, RHP, Lower Columbia JC: Power arm with mid-90s fastball, erratic breaking ball, may fit best in relief up the ladder but has the stuff to close. He has a first-round quality arm but needs more polish. This is an overdraft by perhaps a round or two, but he does have a quality arm and the Rays are a good fit for him.

1-43) Diamondbacks: Andrew Chafin, LHP, Kent State: Power-armed lefty is Tommy John survivor and had some bouts of soreness this year, but ceiling is excellent. This could be a HUGE steal if he stays healthy. Arizona sure brought some high-ceiling arms into the system with this draft.

1-44) Mets: Michael Fulmer, RHP, Deer Creek HS, Edmond, OK: Overshadowed by Bundy and Bradley in Oklahoma but an excellent prospect in his own right, hitting the mid-90s. Totally legitimate pick, as Fulmer would be a first rounder in many classes.

1-45) Rockies: Trevor Story, SS, Irving HS, Irving, TX: Outstanding arm, can remain at shortstop, and has a chance to be a solid hitter as well. I am very pro-Story, and I think this is a great pick for the Rockies.

1-46) Blue Jays: Joe Musgrove, RHP, Grossmont HS, El Cajon, CA: Big 6-5 guy with 90+ sinker and strong curve, should be signable away from San Diego State in this spot. This reminds me of how the Jays picked up a bunch of high-ceiling right-handers in the draft last year. Solid choice.

1-47) White Sox: Keenyn Walker, OF, Central Arizona JC: Blazing speed and greatly improved hitting skills, along with a solid glove, push him to the top of the White Sox draft list. I like Walker a LOT and he was on my list of players who could go earlier than expected. He's got some risk, but the reward could be huge.

1-49) Giants: Kyle Crick, RHP, Sherman HS, Texas: Another power arm hitting 93-96 MPH and a promising curveball, should fit well into Giants farm system. Like Kelly, Crick could have easily gone much higher than this. Solid pick.

1-50) Twins: Travis Harrison, 3B, Tustin HS, California: Huge power but doubts about defense kept him out of the first round. Still, even if he ends up at first base, this is a potential 30-homer bat and an impact guy for this slot. Good pick.

1-51) Yankees: Dante Bichette, OF, Orangewood Christian HS, Orlando, FL: Very similar to his father with the same mixture of strengths and weaknesses if he develops as expected. Perhaps an overdraft by a round, but the bloodlines are excellent and I am not convinced this is an overdraft at all. Another possible 30-homer bat.

1-52) Rays: Blake Snell, LHP, Shorewood, HS, Shoreline, Washington: Very projectable lefty with low-90s fastball and more to come if he fills out as expected. Might be an overdraft by a round, but not a huge one. Affordable and has signficant upside.

1-53) Blue Jays: Dwight Smith, Jr., OF, McIntosh HS, Georgia; Pure hitter who is similar to his father but should be/could be better overall. Buyable out of Georgia Tech in this spot. I like Smith a lot and this is a great pick.

1-54) Padres: Brett Austin, C, Providence HS, Charlotte, NC: Rather raw on defense but has a very promising bat, late helium and positional scarcity moved him up boards. Not an overdraft by very much, if at all.

1-55) Twins: Hudson Boyd, RHP, Bishop Verot HS, Fort Myers, FL: Beefy as 6-3, 235, but has a live arm with a 90-95 MPH fastball and a very strong curve. Could be workhorse starter or closer. He is not a personal favorite and I went in a different direction in my shadow draft, but he does have a fine arm and good polish for his age, and was expected to go in about this spot, so not an overdraft.

1-57) Blue Jays: Kevin Comer, RHP, Seneca HS, Tabernacle, NJ: Somewhat raw and has a Vanderbilt commitment, but low-90s fastball, promising curve, and high ceiling make him interesting gamble. I'm not wild about him, but he fits well into the Blue Jays development program.

1-58) Padres: Jace Peterson, SS, McNeese State University: Excellent athlete with football background has more polish than you might expect, solid bat and might stay at shortstop. I think this is a solid choice given the normal positon scarcity up the middle.

1-59) Rays: Grayson Garvin, LHP, Vanderbilt: Velocity boost pushed his fastball well into the 90s this year despite being overshadowed by other college arms. Not an overdraft here, as I think Garvin is underrated by many observers.

1-60) Rays: James Harris, OF, Oakland Tech HS, CA: Signable athlete seems like an overdraft but might not be: he's toolsy, has power and speed, and will take a walk. The more I think about it, the more I like it. Harris was a bit under the radar, but the patience/speed combination is unusual and Rays fans shouldn't assume this was all about money.