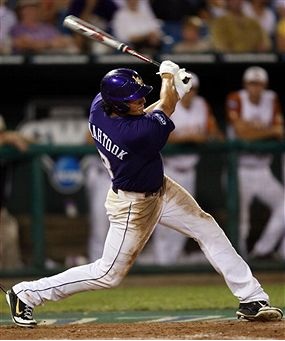 Mikie Mahtook (Getty)
Some thoughts and opinions on the first day of the 2011 MLB draft yesterday, focusing on Steals and Stretches

Biggest Steal: Mikie Mahtook dropping all the way to 31 surprised me, but I guess that is testimony to the strength of the draft this year. His performance for LSU this spring was spetacular, even with the new bats, and he's got some tools; he isn't a slug, and I think some press reports that his tools are just average are overblown. I think he can stay in center field for awhile, but even so he is a guy who could be a 20-20 player, and he's made huge strides with his late discipline. Big bargain at 31 in my view.

Biggest Stretches: Cory Spangenberg is a stretch for me at 10th overall. I could see him at 20-25, but 10 was too early. However, apparently the Padres REALLY wanted him, and didn't think he would be available at 25, so while I think it was an overdraft, I'm not really critical about it.

A second stretch was Stanford's Chris Reed at 16, as I think he is more of a supplemental talent. But the Dodgers have serious financial constraints, he would sign for slot, and it's not like he's a bum: he's a lefty with a 90+ fastball and a starter's arsenal despite relief use in college. If they stretch out his arm properly and convert him successfully to the rotation, this can work out.

Tampa Bay's selection of shortstop Jason Hager at 32 is an overdraft by about 20 spots, as I saw him more as a late supplemental guy. Baseball America is pretty down on him but I think he is better than they what wrote up, great intangibles with underrated tools.  Kevin Matthews at 33 also seems an overdraft by 20-30 spots to me, but the Rangers have some expertise in undersized lefties with live arms, and I will defer to their judgment for now.

Biggest Value/Steal: Mikie Mahtook.
Biggest Stretches: Spangenberg, Reed, Hager, Matthews, although you can see the logic behind all four and none of them are totally insane.

I will have more about the supplemental round later.