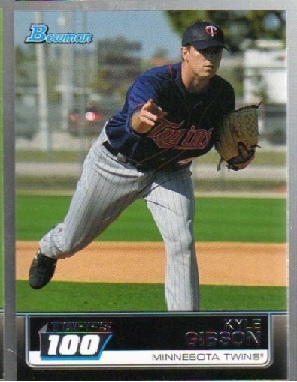 Prospect of the Day: Kyle Gibson, RHP, Minnesota Twins
2011 has been an awful year for the Minnesota Twins. This was supposed to be another team with a good shot at the post-season, but a rash of injuries to key players, putrid offense, and disappointing pitching has coalesced into a miserable campaign. Still, there are at least a few things for Twins fans to look forward to, like a high slot in the 2012 draft, as well as the eventual arrival of pitching prospect Kyle Gibson.

Drafted in the first round from the University of Missouri in 2009, Gibson was supposed to be one of the top two or three pitchers in that draft class, until a late-spring forearm injury reduced his stock enough that the Twins were able to pick him 22nd overall in the first round. He showed no ill effects in 2010, going a combined 11-6, 2.96 with a 126/39 K/BB in 152 innings at three levels. He's a Triple-A Rochester this year and is continuing to perform well, with a 3.60 ERA and a 59/11 K/BB in 55 innings over 10 starts, with 49 hits allowed. The improvement in his K/IP ratio this year stands out as a positive marker.
Gibson is tall and lean at 6-6, 210 pounds. His fastball varies between 87 and 93 MPH, but it plays up due to the contrast with his slider and changeup, both of which rate as plus pitches according to scouts. He throws strikes and has a great feel for pitching, and is an adept ground ball generator not especially vulnerable to the home run. Gibson doesn't have the excellent velocity associated with a classic number one starter, but his pitchability and strong secondary pitches should make him a fine number two or three starter.
While Gibson isn't likely to be promoted soon, we should see him sometime in 2011, especially if the Twins are sellers at the trade deadline and move some of their other arms. Even without other transactions, Carl Pavano, Brian Duensing, and the ghost of Francisco Liriano aren't going to hold Gibson back from a rotation spot much longer.