Thoughts on the Suspension of Donavan Tate

Share All sharing options for: Thoughts on the Suspension of Donavan Tate 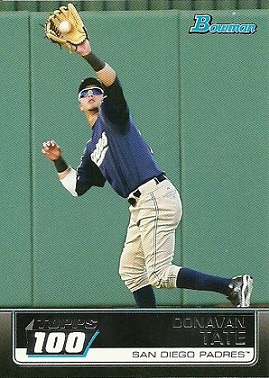 The big news this morning in prospect land is the suspension of Padres outfield prospect Donavan Tate, benched for 50 games after testing positive twice for a "drug of abuse."

This is supposedly marijuana, although some reports indicate he was actually using K2, a "pot substitute."  Either way, his career path takes another detour.

The third overall pick in the 2009 draft, Tate's career has been slowed down by a series of injuries, including a hernia, a broken jaw sustained in an ATV wreck, a serious beaning, a bad shoulder, and a digestive virus. He is a terrific athlete but was considered raw when drafted, and two years of doctor visits have done nothing positive for his development. He was hitting a promising .294/.368/.471 in 17 games this year (six for Low-A Fort Wayne, 11 for short-season Eugene) before the suspension.

Some points of thought, some of which may be controversial.

1) From a philosophical perspective, my personal opinion is that the "war on drugs" is a failure and has caused more damage to our society than the drugs themselves.

If I was up to me, I would legalize, strictly regulate, and tax certain psychoactive substances such as pot, salvia, and psilocybin. I think LSD and ecstasy should be available in clinical settings for psychiatric purposes. Some banned substances have positive therapeutic benefits for some medical conditions and can even provide valuable psychological and spiritual insights.

Personally I think that is part of the reason they are banned. I have to agree with Bill Hicks on this, it is harder for the powers-that-be to maintain finance capitalism, the military/industrial complex, and our various other societal sadisms if too many people have a taste of unconditional love and total forgiveness. Another side-effect of the drug war is that the people who would most benefit from exploring these substances in a controlled way are the ones least-likely to have access to them. This stuff is wasted on the young; people in mid-life crises, abuse victims, hospice patients....people in existential pain are more likely to get something positive out of them than high school kids looking for a fun high and a way to rebel.

I wouldn't legalize everything. Heroin and meth are destroyers. But I would definitely put far more resources into treatment for addicts and would pivot away from the militarized approach we currently have. Throwing non-violent offenders into prison is pointless and just makes the problem worse.

(DISCLAIMER: I have never tried an illegal substance while it was illegal. I advocate changing the law, not breaking it).

2) With point 1 in mind, the fact that Tate toked up doesn't bother me as a moral matter. It does not indicate to me that he is a bad person. Same deal with Jeremy Jeffress, who by every account I've heard is a good person. The potheads and shroom users I know tend to be more pleasant people, even happier ones, than the drunks.

3) All that said, this does indicate to me that Tate has a genuine problem with emotional maturity and reckless judgment. I don't think pot should be illegal. BUT IT IS ILLEGAL, and against the rules of baseball to use. One time you can write off as a mistake of youth, but the fact that he's been caught twice is a red flag about his maturity level and how seriously he takes his career. That, to me, is the biggest issue here. He's reckless.

4) Even with point 3, he is still young enough to outgrow this. But he has to stay on the field to develop his tools into skills, and this is just one more roadblock in the way, a self-imposed one in this case.