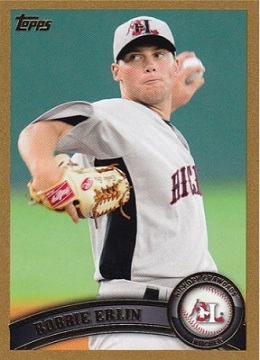 **Double-A Frisco southpaw Robbie Erlin had a spectacular game yesterday against Corpus Christi, going 6.2 innings, fanning 14 while walking just one, allowing five hits and two runs. Since being promoted to Double-A in late May, the Texas Rangers prospect is 4-0 in six games (five starts), with a 38/6 K/BB in 36 innings and 38 hits allowed, 4.79 ERA, with eight homers allowed. Before his promotion he had a 2.14 ERA with a 62/5 K/BB in 55 innings for High-A Myrtle Beach, with just 25 hits but seven homers allowed.

Erlin's profile is an interesting mixture of strengths (outstanding K/BB and K/IP) and weaknesses (strong fly ball rate, lots of homers). Most scouts love his competitiveness, overlooking his small size (6-0, 175) and lack of overwhelming velocity, focusing on his strong curveball and changeup. His home runs tend to come on mistake fastballs left over the fat part of the plate,and improving his command within the strike zone will be the key to his future.

**The professional career of Houston Astros prospect Kyle Hallock is off to a good start. Drafted in the 10th round this year out of Kent State, Hallock has pitched 11 innings in two starts for the Tri-City ValleyCats in the New York-Penn League, allowing two runs (1.64 ERA) with a 9/1 K/BB and nine hits allowed. He went six shutout innings last night and fanned six. Hallock actually out-pitched college teammate Andrew Chafin this spring and was named Mid-American Conference Pitcher of the Year. Hallock doesn't throw as hard as Chafin and lacks the same long-term upside, but he has sharp command of an 86-90 MPH fastball, with a strong slider and changeup that help the fastball play up. As with all finesse lefties, we'll have to see how he does at higher levels, but he's worth watching.

**Another lefty from the 2011 draft to keep track of: Austin Wright of the Philadelphia Phillies, drafted in the eighth round from the University of Mississippi. He throws harder than Hallock at 90-94 MPH, and his curveball, while inconsistent, has strong moments. He didn't have consistent success in college, but he's big and strong (6-4, 235), and certainly has the attributes to be a fine pitcher if he can refine his secondary stuff. He's pitched nine innings so far for Williamsport in the New York-Penn League, allowing six hits, two walks, and one run, while fanning 11. This is the kind of physical pitcher that the Phillies have a good track record with.

**Another member of the big lefty contingent is Detroit Tigers southpaw Brian Flynn, drafted in the seventh round this year out of Wichita State. Like Wright, Flynn is big (6-8, 240) and has a live arm with low-90s velocity, sometimes higher. And like Wright, Flynn was inconsistent in college due to problems with his secondary pitches and his location.

He performed well in second start for West Michigan in the Low-A Midwest League yesterday, going seven shutout innings, allowing three hits and one walk, fanning five. He gave up three runs and five hits in his first pro outing on June 19th, going 4.1 innings, though he did fan four. The Tigers will use Flynn as a starter to help him refine his slider and changeup, but he could be a very intimating bullpen presence down the line even if the secondaries remain erratic.