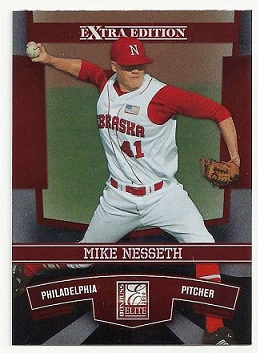 **If you are looking for a sleeper pitching prospect to follow, consider right-hander Mike Nesseth in the Philadelphia Phillies system. I first notice him pitching for the University of Nebraska in 2008, working at 93-95 MPH with a lot of movement on his fastball, plus a strong, "pro-looking" body and frame at 6-6, 225. He posted a 3.58 ERA with a 53/14 K/BB in 38 innings, with just 28 hits allowed as a freshman reliever. The Cornhuskers moved him to the starting rotation in 2009 and his ERA spiked to 5.01, with a noted reduction in velocity though he still fanned 73 in 65 innings. In 2010 he blew out his elbow and had to have Tommy John surgery, but the Phillies still drafted him in the 17th round last year.

Nesseth has completed his rehab and is back on the mound. Reports indicate he's regained his pre-injury velocity, and the Phillies have revamped his delivery. He drew some Roy Halladay comparisons in spring training, which is exaggerated but shows you how optimistic some people are. He made his first start for short-season Williamsport over the weekend, allowing two hits and one run in six innings, walking four but fanning four. Keep an eye on him.

**Another 2010 draftee making his pro debut is Toronto Blue Jays prospect Justin Nicolino, who pitched five shutout innings in his first start for short-season Vancouver on June 19th, allowing one hit and one walk, fanning five. Nicolino was drafted in the second round in 2010 from high school in Orlando. He had a firm Virginia commitment but the Blue Jays signed him for $615,000. Nicolino threw 85-87 in high school but has already gained enough strength in the last year to get his fastball into the 90 MPH range now. He throws strikes, has a good changeup, and is developing a good curve to complete his arsenal.

**San Francisco Giants prospect Zack Wheeler is adapting well to High-A. Drafted in the first round in 2009 from high school in Dallas, Georgia, he was limited by pitch counts, command problems, and a fingernail injury to just 59 innings last year for Low-A Augusta, where he fanned an impressive 70 hitters but also walked 38 and posted a 3.99 ERA. He's already exceeded the innings count this year with 61 frames in 11 starts for High-A San Jose, resulting in a 68/33 K/BB, 45 hits allowed, and a 3.26 ERA. Despite the reduction in ERA compared to last year, his component ratios are actually very similar and his FIP (3.60) is actually not as good as last year's (3.11), although in general he's pitching impressively.

Wes Yee has a good scouting report on him, noting a fastball between 88 and 95 MPH, a strong curve, and a changeup he needs to use more often. I agree that Wheeler could become a number one or two starter, but he'll need to sharpen his command, and I don't think he's quite ready for Double-A.

**Kansas City Royals third base prospect Cheslor Cuthbert is holding his own in the Midwest League. An 18-year-old Nicaraguan signed in 2009, Cuthbert is hitting .289/.350/.467 in 24 games for Kane County, with nine walks and 14 strikeouts in 90 at-bats. The Midwest League OPS is just .686, so his .818 OPS indicates that he's well ahead of his competition in performance despite his age. Cuthbert's plate discipline isn't great but has taken a step forward this year, and scouts remained enamored with his bat speed, power potential, and solid ability to make contact. He's also made a dramatic improvement with the glove this year: he had an .891 fielding percentage and seven errors in 28 games of rookie ball last season, but has made just one error in 22 games this year. He still needs work with his footwork and just more experience in general, but it's a definite start.