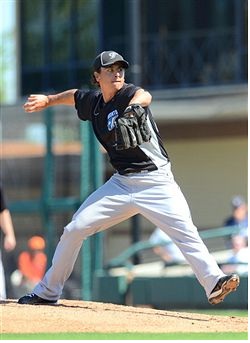 The big news in Toronto right now is the demotion of prized prospect Kyle Drabek, and the promotion of right-hander Zach Stewart, who will make his major league debut against the Baltimore Orioles this afternoon.

Stewart was originally drafted by the Cincinnati Reds in the third round in 2008, out of Texas Tech. He was packaged by the Reds in the summer 2009 Scott Rolen trade, and immediately became one of the best prospects in the Toronto system, although he was soon overshadowed to some extent by other trade acquisitions and draftees. Stewart threw 95-96 MPH in the bullpen but has settled into the 89-93 range as a starter, though his fastball has sinking action. His best secondary pitch is an effective variable-speed slider. His changeup has improved over the last year and rates as average overall, sometimes better than average, sometimes a bit worse. He's made great progress refining his mechanics and command since college, and has shown the ability to eat innings without ill-effect.

Stewart spent 2010 with Double-A New Hampshire in the Eastern League, going 8-3, 3.63 with a 106/54 K/BB in 136 innings. He returned to the same level this year and has gone 4-3, 4.39 in 12 starts with a 49/21 K/BB in 70 innings, 78 hits allowed. The strikeout rate is not especially good, although he's thrown strikes quite effectively and his FIP this year (3.67) is actually better than last year (4.18). His GO/AO ratio used to be very strong on the ground ball side, but has tilted more towards neutral as he's moved up the ladder, though scouts still report good sinking action with his fastball.

Right now, Stewart projects as a number three or four starter at the major league level. He doesn't have Kyle Drabek's long-term upside, but he has sharper command at this point and could be a better bet for short-term success if he throws strikes. I felt that Stewart was actually Drabek's equal as a prospect entering 2010 (I had Stewart ranked 17th and Drabek 18th, both with B+ ratings), although I moved Drabek ahead on the list in 2011. I still had Stewart as a Grade B+ entering this year, but had moved Drabek up a notch to an A-.

Key factors to watch in Stewart's first start: how much sink does he get on the fastball? How much does he use the changeup? Is he confident about challenging hitters?