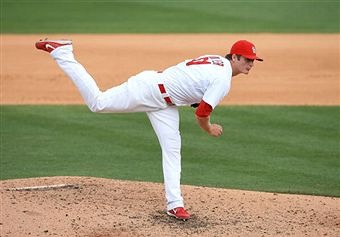 Drafted in the first round in the 2009 draft, 19th overall, Shelby Miller was promoted to Double-A last week, allowing one run in six innings in his first start for Springfield, fanning five with two walks. He was also strong in his second outing, fanning nine in six innings while allowing two earned runs.  Reaching Double-A at age 20 is no easy feat, and Miller has the makings of a future ace.

Selected out of high school in Brownwood, Texas, Miller passed up Texas A&M to sign with the Cardinals for $2.875 million. Blessed with ideal pitcher size at 6-3, 195, he was supposed to be somewhat raw and needing command refinements when drafted, but he quickly showed unusually good command for a young power pitcher, dominating the Midwest League in 2010, posting a 3.62 ERA but with an outstanding 140/33 K/BB ratio in just 104 innings. He even more impressive this year, with a 2.89 ERA and a 81/20 K/BB in just 53 innings with 40 hits allowed for High-A Palm Beach before his promotion.

Miller works with a 94-98 MPH fastball. His curveball is already plus and his changeup has rapidly improved, giving him three strong pitches. He has mound presence beyond his years and is a pitcher, not a thrower. His mechanics are clean, repeatable, and consistent, which should help him stay healthy. He has all the physical and mental attributes of a number one starter, and we should see him in the majors sometime next year. Barring an injury or unlikely collapse in Double-A, Miller is a clear Grade A prospect.