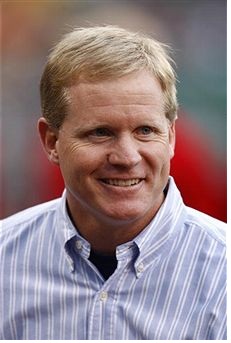 The Part of Neal Huntington will be played by Aaron Eckhart

The Pirates executed a great one-two-three punch with Cole/Bell/Dickerson at the top of the draft, then went to their usual strategy of loading up with projectable high school arms.

1) Gerrit Cole, RHP, UCLA: Can't complain about this. Although his season was erratic, he has the physical and mental attributes to be a number one starter.

2) Josh Bell, OF, Texas HS: He may be completely unsignable, but it's a good gamble. If he doesn't sign, you pocket the compensation pick next year. If he does sign, you have a switch-hitting Jason Heyward.

3) Alex Dickerson, 1B-OF, Indiana: Very strong bat, position questions kept him from going earlier but could have gone in the first round in a thinner draft. Great value here.

4) Colten Brewer, RHP, Texas HS: Raw, low-90s fastball, projects more as he matures. No breaking ball, will need time to develop but upside is high. No four-year commitment, should be signable.

5) Tyler Glasnow, RHP, California HS: Like Brewer, Glasnow is very projectable but quite raw. University of Portland commitment, but should be signable in this round.

OTHERS OF NOTE: OF Jo-El Bennett (11th round, Alabama HS) is very toolsy and a bit raw, scouts think he could end up being a fine player with power and speed, will have to be bought out of Troy University commitment. RHP Kody Watts (15th round, Washington HS) is projectable and has a high upside but is strongly committed to college at Portland. LHP Eric Skoglund (16th round, Florida HS) is similar, promising but expensive to buy out of Central Florida. OF Aaron Brown (17th round, California HS) is, guess what, athletic and has a chance to be very good but strongly committed to Pepperdine. C Derek Trent (31st round, East Tennessee State) has power, a strong arm, good strike zone judgment, and is a college senior.

SUMMARY: Extremely high long-term upside draft, but also extremely expensive to sign everyone. Bell may be a total waste of a draft pick if he is as strongly committed to Texas as he says he is, but I think it is worth a gamble. Anything could happen with the big group of projectable arms, but it fits their strategy of recent drafts. Dickerson is an advanced bat and a bargain in the third round. Gerrit Cole is outstanding obviously.