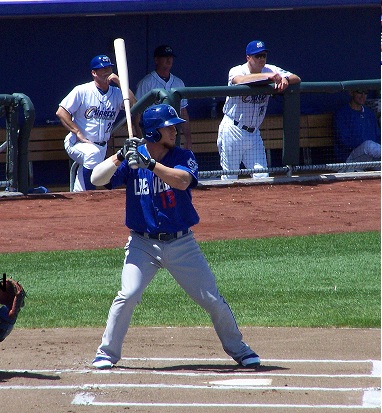 Brett Lawrie at the plate 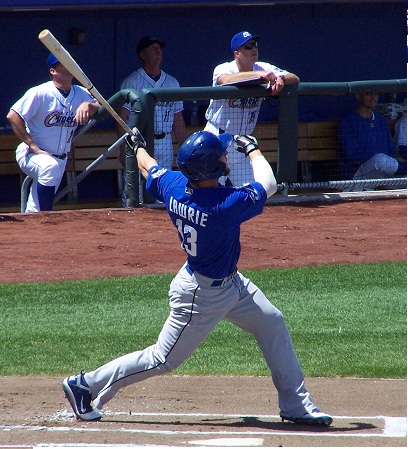 I went to Omaha on Sunday, May 22nd, and took a close look at Blue Jays prospect Brett Lawrie.

Based on his track record, and what I saw Sunday afternoon, I am convinced that Brett Lawrie has everything needed to be a superstar. The only things that could get in the way are injuries or his own personality.

There were three cautions for Lawrie entering 2011: his plate discipline, his position, and his attitude. We'll start with the hitting.

Lawrie has always shown me good bat speed when I've seen him, but he's taken that up a notch this year. He's closed his stance slightly compared to previous observations, and his bat looks even quicker now. He is working counts MUCH more effectively than when I've see him in the past. One of his homers (the one pictured) was a long arching shot pulled to left center. The second one was an opposite field homer, a result of Lawrie making strong contact on an outside pitch and driving it perfectly. The one thing that was keeping him from fully tapping his natural power was impatience, but he showed a terrific eye in this game, and this seems deliberate: after posting a weak 4/23 BB/K in April, he's at 11/13 in May. When he was in high school, scouting reports indicated that plate discipline was one of his strengths. He didn't show much of that in his first two years of pro ball, but he is suddenly controlling the zone again. If he keeps that up, look out.

Defense: Lawrie converted to third base from second base this year. The results so far: a .922 fielding percentage, although combined with a strong 3.02 range factor. If you look at the boxscore for this game, you'll see that Lawrie made two errors. But that's not the whole story.
One of his errors went like this: the ball was hit to the gap between the third baseman and shortstop. Lawrie was playing slightly off the bag, but ranged far to his left, well into the normal territory of the shortstop. The SS seemed to misread the ball but Lawrie got to it, backhanded it, did a quick almost 360 pivot, and fired the ball to the first baseman one step ahead of the runner. His release was very quick and it was a very athletic play. However, the throw was off target and pulled the first baseman off the bag. The key here was that Lawrie showed great range and quickness to his left, and with more experience at the position that throw might well have been on target.
Another impressive play: Lawrie was playing back. The hitter made a perfectly placed bunt, Lawrie charged, scooped the ball, and made an off-balance, on-target throw to first base. The runner beat the throw for a single, but again Lawrie showed the requisite quickness and athleticism for the position.
My view of Lawrie's defense is this: he has more than enough range and athleticism for third base, has a quick release, and a strong enough arm. He just needs more experience.
He also runs well with more speed than you'd expect given his size. I didn't get to see him do anything on the bases other than a home run trot, but he's 9-for-10 this year with steals, much better than the 30/43 mark he posted last year.

Attitude: This is the big knock on Lawrie and one of the reasons (it is said) that the Brewers were willing to trade him.
Obviously there is only so much you can tell from just watching a player, but I kept my eye on  him most of the game, even he wasn't the center of attention or involved in a play. Lawrie fidgets a lot. He seems to radiate intensity and energy. This can be somewhat off-putting, like when he fidgets during the national anthem when everyone else is still, but the upside is that his body looked alive far more than everyone else on the field, with the possible exception of Lorenzo Cain. Comparing Lawrie with Moustakas for example, Lawrie just oozes energetic power compared to Moustakas' solid, staid affect.
Lawrie's intensity manifested itself negatively when he got into an argument with the umpire about a check-swing strike three call. It looked like he almost got ejected (which would have really irritated me, it was just the third inning), but he pulled himself back in time and stayed in the game. There are all kinds of stories/rumors about Lawrie's personality and antics, but he plays with fire on the field.

To summarize, I really believe in Lawrie's bat. He has the tools to be a good defensive third baseman with experience. He plays very hard on the field. You don't have to be a nice guy to be a great player. If he avoids injuries, grows up a bit and learns to channel his energy and intensity, he's going to be a monster.