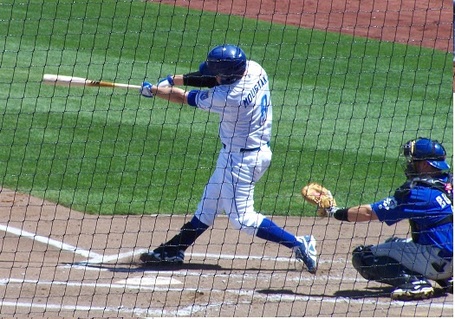 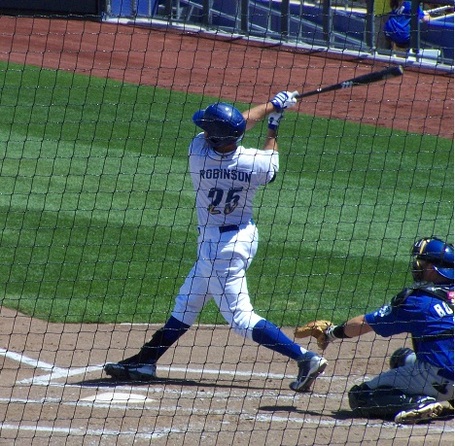 I went to Omaha Sunday for the Las Vegas/Omaha game. My plan was to concentrate on Royals prospect Mike Moustakas and Blue Jays prospect Brett Lawrie, then to write up a Prospect Smackdown piece based on what I saw.

Unfortunately, Moustakas got a day off defensively and served as the DH, so I couldn't get a read on his defense. I decided to focus very strongly on Lawrie, basically spending most of the game watching him. I also paid attention to Moustakas and Omaha first baseman Clint Robinson, so we'll start with them before getting into Lawrie later this afternoon.

Mike Moustakas, 3B, Omaha Storm Chasers: Went 1-for-4 with a double, currently hitting .265/.347/.490 on the year with eight homers, 17 walks, 29 strikeouts in 155 at-bats. Has been heating up in May (.306/.393/.583) after a slow start in April. Compared to when I've seen him in the past, he was more selective at the plate, but still showed the compact-but-powerful swing that makes him very dangerous. Although he's not as thick around the waist and legs as he looked in 2009, he's still slow and I don't think his body is going to age well. The bat will be excellent though and is nearly major league ready in my view.

Clint Robinson, 1B, Omaha Storm Chasers: Went 1-for-4 with a walk, currently hitting .352/.434/.630 for Omaha. 26-year-old first baseman, looks every bit his  listed 6-5, 235 height/weight. Very slow runner. Royals fans want to know if this guy is a real prospect, or if he's another in the line of Calvin Pickering or Kila Ka'aihue disappointments. Robinson has always looked good when I've seen him. His swing is longer than Moustakas' and his bat speed isn't quite as good, but he does a good job controlling the strike zone and he doesn't strike out much for a power hitter. I've seen him take pitches the opposite way and he's not a strict pull hitter.  He is not a very good fielder and looks like a born DH. Although Robinson is nowhere close to the Moustakas or Hosmer class of prospect, I think his approach gives him a chance to be successful in the majors, at least as a platoon bat.