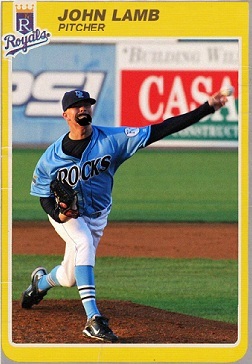 As good as the 2011 Baseball Draft class is, it could have been a lot better. Many current to prospects were drafted out of high school in 2008, and many of them had strong college commitments. How would the 2011 draft class look if some of these '08 guys had gone the college route?
We looked at the first and second rounds of the '08 draft on Friday. Today I'm going to focus on high schoolers drafted in '08 who weren't in those rounds but who have emerged as strong prospects, and get a feel for where they might fit into the '11 draft class if they'd gone to college.
Here are nine of these guys, Bucci through Lamb. Ten more will follow this afternoon.

Nick Bucci, RHP: 18th round pick by the Brewers out of high school in Ontario in 2008. Very raw when drafted but has developed into a decent prospect and is pitching well in the Florida State League this year. To the best of my knowledge he didn't have a four-year college commitment in the US, and Canadians can end up just about anywhere. The University of British Columbia has a good team this year (30-15 playing US schools in the NAIA), so we'll just say that Bucci went there in the alternate universe and would project as a third-fifth round pick with his low-90s fastball.

Jared Cosart, RHP: The Phillies spent $550,000 to prevent 38th-round pick Jared Cosart from attending the University of Missouri in 2008. He's been successful, if injury-plagued, as a pro, showing excellent velocity and decent command. Assuming similar success in college (great arm, good numbers, but durability concerns) I think he'd be a supplemental or second round candidate this year.

Rashun Dixon, OF: 10th round pick in 2008 by Oakland, who used $600,000 to sign him away from Mississippi State football. He has terrific tools but hasn't figured out how to play baseball yet, currently hitting .223/.308/.427 in the California League. If he remained similarly raw in college, he'd still entice with his tools but his draft position would depend on football. Baseball considerations only, he's probably be a middle round pick.

L.J. Hoes, 2B: Third round pick by Baltimore in 2008, draws good reviews from scouts but hasn't hit well since a bout of mononucleosis last spring. If he'd gone to school at North Carolina and still got mono, he's be something of a draft enigma I think, still showing the tools to interest scouts but people wondering if his bat would live up to expectations. He'd probably go in the third-fourth round range still.

Nate Eovaldi, RHP: 11th round pick in 2008 by the Dodgers, bought away from Texas A&M for $250,000. Erratic track record but has a live arm, power sinker, and is pitching well in Double-A this year. I'd mark him as a third-round candidate in the 2011 class.

Isaac Galloway, OF: Drafted by the Marlins in the eighth round in 2008, cost $245,000 to buy away from San Diego State. Good tools, particularly speed, but has been plagued by injuries. Hitting .241/.285/.414 this year in the Sally League with bad plate discipline. In a 2011 college context his tools and pedigree would still get him drafted, but not earlier than the fourth or fifth round and possibly later.

Robbie Grossman, OF: The Pirates spent $1 million to buy Grossman away from the University of Texas as a sixth-round pick in '08. He hasn't lived up to expectations, showing little power and just a .247 average in 158 games in High-A. He steals bases and draws some walks, but just hasn't hit as well as anticipated. His tools would still get him drafted in '11 out of Texas, but as a middle round guy, and he wouldn't be earning a $1 million bonus.

Corban Joseph, 2B: A fourth round pick in 2008 by the Yankees, Joseph is currently hitting .299 with gap power in Double-A. He's be putting up big numbers at the University of Kentucky, likely enough to get himself drafted least a round or two higher this year, given the relative scarcity of middle infielders who can hit.

John Lamb, LHP: Lamb was drafted in the fifth round in 2008 by the Royals, but would have gone at least three rounds higher if not for an elbow fracture suffered in a car accident. To the best of my knowledge he didn't have a four-year commitment, likely due to the injury. If he had passed up the Royals $165,000 offer, he could have ended up just about anywhere once he proved his health. We can put him at Quantum Fluctuation Junior College and he's probably be a second round pick this year.