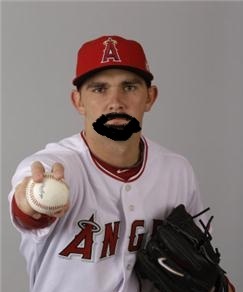 As good as the 2011 Baseball Draft class is, it could have been a lot better. Many current to prospects were drafted out of high school in 2008, and many of them had strong college commitments. How would the 2011 draft class look if some of these '08 guys had gone the college route?
What I've done here is made a list of all prospects drafted out of high school in the first round, supplemental round, or second round in 2008 who signed with major league teams, but had a college commitment. The list is organized alphabetically, and see if we can figure out where they would stand if they were eligible to be drafted this year.
This is the pitchers; the hitters were posted earlier.

Tyler Chatwood, RHP: Second round pick in '08 by the Angels, signed with them rather than attend UCLA.  In the majors this year and holding his own though command is an issue. He'd be having an outstanding year if he was in college and would have to rate as a first-round pick, though exactly where is hard to say given the depth of the class.

Brett DeVall, LHP: Supplemental first round pick by the Braves in '08, signed with them rather than attend the University of Georgia. Performed OK in the minors, but suffered from injury troubles and was released this spring for unclear reasons.

Trey Haley, RHP: Second round pick by the Cleveland Indians, passing up Rice University. Hasn't gotten out of low A-ball, has a career 6.09 ERA with a 162/163 K/BB in 201 innings. Command problems are the big issue here. If he'd gone to college his arm strength would still get him drafted, but not nearly as high as he was in '08, more likely a late-round project pick.

Brad Hand, LHP: Minnesota high school lefty was a second round pick by the Florida Marlins, passing up Arizona State. Erratic in '09, very good in '10, and erratic so far this year in Double-A. If he'd gone to college, he'd probably slot in the supplemental round this year.

Casey Kelly, RHP:  First round pick by the Red Sox in ‘08, passing up the chance to be a two-way player and college quarterback at the University of Tennessee. Reached Double-A quickly albeit his performance at that level hasn't been exceptional. He'd still have been drafted high out of college, probably about the same slot, late first round or early supplemental.

Jason Knapp, RHP: Second round pick in 2008 by the Phillies, passing up college ball with      North Carolina. He's been overpowering (208 strikeouts in 156 innings) but injury-prone as a professional and hasn't pitched this year. If he's on the shelf in the alternate universe as well, it it is hard to know where he'd get drafted, or  if he'd be redshirted.

Seth Lintz, RHP: Second round pick in '08 by the Brewers, passing up the University of Kentucky.  He's been awful as a pro, with a 7.35 ERA and a 94/79 K/BB in 98 innings, done in by serious command problems. A similar performance in college would obviously kill his stock in the '11 draft, though he might still get drafted as a late-round sleeper.

Kyle Lobstein, LHP: Second round pick in '08 by Tampa Bay, passing up the University of Arizona.  Has been a decent A-ball pitcher, 3.64 ERA with a 208/82 K/BB in 238 career innings, but his body is maxed out and he has no projectability left. In college he would have pitched well but not impressed with his stuff, likely projecting somewhere in the 5-10 round range this year.

Jordan Lyles, RHP: Supplemental first round pick in '08, signing with the Astros and passing up college ball at South Carolina. He's risen rapidly and is in Triple-A now, holding his own. Lyle's combination of excellent command and decent stuff would have made him very successful in college, though with the incredible depth of the '11 class he might not get drafted too far ahead of where was in '08 (38th overall).

Ethan Martin, RHP: Drafted by the Dodgers in the first round in '08, 15th overall, passing up Clemson. He was solid in '09 but has faced serious command problems in '10 and '11, pitching poorly in the California League. In college, this would be a good freshman year, followed by control problems as a sophomore and junior. There is no way he would be a first round pick in '11, probably going somewhere in the fourth to sixth round range.

Mike Montgomery, LHP: Supplemental first round pick in '08 by the Royals, passing up Cal State Fullerton. He's reached Triple-A and has performed well, though with some occasional problems with durability and control. Still, he's one of the best lefty prospects in baseball, and would be considered a first-round talent in the '11 class, though likely not in the top ten.

Jake Odorizzi, RHP: Supplemental first round pick by the Brewers in '08, passing up the University of Louisville. Pitched OK in rookie ball in '09, very well in low-A in '10, and has been amazing in High-A this year. An OK freshman year, solid sophomore year, and outstanding junior year in college, combined with Odorizzi's above-average stuff and superb command, would make him a premium pick again in '11.

Robbie Ross, LHP: Second round pick by the Rangers in '08, passing up the University of      Kentucky. He's been generally solid in A-ball, has a career 3.27 ERA with a 214/64 K/BB in 253 innings, but doesn't throw exceptionally hard. He's pitching well in High-A this year, but in a deep '11 draft class he would probably be a third or fourth round pick.

Tyler Stovall, LHP: Second round pick by the Braves in 2008, passing up Auburn. A-ball track record is mediocre, with serious command troubles at times resulting in a 123/107 K/BB in 117 career innings. He is currently struggling in Low-A, with a 10/10 K/BB in 13 innings at Rome. Similar struggles at the college level would have depressed his stock significantly.