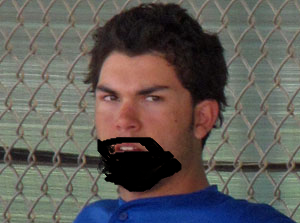 As good as the 2011 Baseball Draft class is, it could have been even better. Many current top prospects were drafted out of high school in 2008, and many of them had strong college commitments. How would the 2011 draft class look if some of these '08 guys had gone the college route?
What I've done here is made a list of all prospects drafted out of high school in the first round, supplemental round, or second round in 2008 who signed with major league teams, but had a college commitment. The list is organized alphabetically. Let's see if we can figure out where they would stand if they were eligible to be drafted this year.
This is the hitters; pitchers will follow later today.

Jay Austin, OF: Drafted in the second round by the Astros out of high school in Georgia. Passed up Southern California commitment. Raw tools guy, hasn't developed well, mediocre High-A player right now. Couldn't see him going earlier than the fourth round now, and only due to his tools. With the new bats this year, metal is unlikely to have boosted his numbers enough to trick scouts into ignoring the flaws in his swing.

Xavier Avery, OF: Another second round pick from a Georgia high school, Avery was drafted by the Orioles and passed up a football offer at the University of  Georgia. Like Austin, Avery hasn't lived up to his potential as a pro, showing excellent speed but otherwise very weak hitting skills. Assuming similar college performance, he'd be a middle round (5-10) pick at best, and it's possible he might have done better in football.

Tim Beckham, SS: First-overall pick in the draft by the Rays, and has been a huge disappointment as a pro, tools have slipped and performance hasn't been great. Hitting somewhat better in Double-A this year. Assuming a similar path at Southern Cal (great high school rep, weak freshman and sophomore years, some performance improvement this year, but weakening tools and questions about his ability to remain at shortstop), he might get as high as the third round, but wouldn't be a premium draft again.

Zach Collier, OF: A supplemental first round pick by the Phillies from a California high school, Collier didn't make a four-year college commitment. He's been horrible as a pro, missed all of 2010 with injuries, and is hitting .191 in Low-A this year. Let's say in the Alternate Universe that he attended Quantum Fluctuation Junior College, was mediocre as a freshman, missed all of '10 with an injury, and is mediocre again this year. His tools and high school rep would still get him drafted, but probably after the 10th round or later.

Jaff Decker, OF: A supplemental first round pick from high school in Arizona, Decker passed up an Arizona State offer to sign with the Padres. In real life he's tearing up the Texas League. In the Alternate Universe, he is destroying college pitching for the Sun Devils and presents a major league bat that should be ready within a year. Scouts still wonder about his body, but his bat is good enough that he'd still project as a first-rounder, perhaps in the back part of the round with all the depth this year.

Cutter Dykstra, INF/OF: Second round pick by the Brewers. Erratic pro track record thus far, hit poorly in '09, well in '10, poorly so far this year. Fast, lacks power, plate discipline inconsistent, has played multiple positions without finding one he is good at. If he'd gone to UCLA and had a similar record, I doubt he'd go high this year, perhaps in the 5-8 round range due to bloodlines and speed.

Derrik Gibson, SS: Second round pick by the Red Sox from high school in Delaware. Hit well in the New York-Penn League in '09, hit badly last year and this year in A-ball. Fast, steals bases, but lacks power, plate discipline erratic, .230 hitter in A-ball. If he'd gone to school at North Carolina, his speed and glove would get him drafted in the middle rounds but no higher.

Anthony Gose, OF: Drafted by the Phillies in the second round, skipped University of Arizona scholarship. Great glove, very fast, no power, plate discipline erratic but might be improving this year. Similar college profile would probably make him a middle round pick, somewhere in the 4-6 round range is my guess.

Anthony Hewitt, OF: Drafted by the Phillies in the first round, skipping Vanderbilt offer. Incredible tools, but totally unrefined as a player, has made some improvements this year though plate discipline is still horrendous. Assuming the same thing held in college, he'd probably be in the same draft region as Gose.

Aaron Hicks, OF: First round pick by the Twins, passed up Southern Cal scholarship. Has shown defense and ability to draw walks as a pro, but power has been disappointing. He'd probably be something like a late second round pick this year.

Destin Hood, OF: Second round pick by the Nationals, passed up Alabama. Another tools guy who hasn't developed as hoped, played OK in '08, hit .285 but with poor discipline and little power last year in Low-A, and has hit badly this year in High-A although plate discipline has improved. Assuming a similar erratic college profile, he wouldn't be any higher than a mid-round pick this year.

Eric Hosmer, 1B: First round pick by the Royals, passed up Arizona State offer to sign. In the alternate universe, he had an injury-plagued freshman year, then destroyed college pitching as a sophomore and junior and has been declared nearly-major-league-ready entering the '11 draft. He went third overall in '08. How high would he go this year?

Brett Lawrie, 3B-2B: First round pick by the Brewers, skipped Arizona State to sign. Tearing up Triple-A currently. Defense is still a question but the bat looks very strong. Can you imagine him, Decker, and Hosmer in the same college lineup? Went 16th overall in 2008. Glove questions might actually make him go a little lower than that in the '11 Alternate Universe draft, but no question he'd be a first-rounder.

Kyle Skipworth, C: First-round pick by the Marlins. Another Arizona State guy, he's been a big disappointment as a pro. The easier competition in college would boost his numbers, though scouts would still detect flaws in his swing (especially with the new bat) and erratic defense. He'd probably be something like a third or fourth rounder I think.

Kenny Wilson, OF: Speedy outfielder drafted in second round by Blue Jays, skipping University of Florida. Has stolen 114 bases in 287 games, but with an overall line of .207/.309/.277. His speed would get him drafted again, but unless the metal bat really tricked scouts, it wouldn't be high.