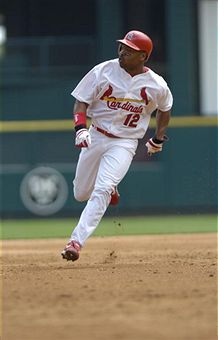 
Per reader request, here is a Career Profile for Ray Lankford, one of my favorite players from the 1990s.

Ray Lankford was drafted in the third round in 1987 by the Cardinals, out of Modesto Junior College in California. He was considered quite toolsy, with above-average speed, although it was uncertain how much power he would develop. Assigned to Johnson City in the Appalachian League after signing, he hit .308 with 14 steals in 66 games. Although he hit just three homers, he did knock 17 doubles, a sign of more possible power to come. At this stage he would likely have rated as a Grade B- type prospect.

Promoted to Springfield in the Midwest League in 1988, Lankford hit .284 with 26 doubles, 16 triples, 11 homers, 33 steals, 60 walks, and 92 strikeouts in 532 at-bats. He was rated as the number six prospect in the league by Baseball America. His speed was impressive, he drew walks, and it looked like his power was developing. I would likely have given him a Grade B, projecting him as a potential regular outfielder if his power continued to develop.

Lankford jumped to Double-A in 1989, hitting .317/.401/.488 with 28 doubles, 12 triples, 11 homers, 38 steals, and 65 walks in 498 at-bats for Arkansas. Better production, at a higher level of competition. What stands out as a major positive was a dramatic reduction in his strikeout rate: he whiffed just 57 times. I would very probably have given him a Grade B+ at this point, and he would have been somewhere on a Top 50 prospects list. He was rated as the Best Prospect in the Texas League by Baseball America.

Lankford had a mediocre rookie season in 1991, but broke out with 40 doubles, 20 homers, and 42 steals in 1992 at the age of 25. He was a very productive, and at times outstanding, regular outfielder for the Cardinals for the next nine seasons, showing a fine combination of speed, power, and on-base ability. His major league career is very much in line with his minor league career: he developed along a nice, steady growth curve in an almost textbook way.

Most Similar Players: Kirk Gibson, Raul Mondesi, Torii Hunter, Bill Nicholson, Cliff Floyd, Raul Ibanez, Larry Doby (HoF), Eric Davis, Reggie Sanders, and Rick Monday. All of those guys were very good-to-excellent in their primes. Lankford (like the other guys on this list) had a fine combination of tools and skills.