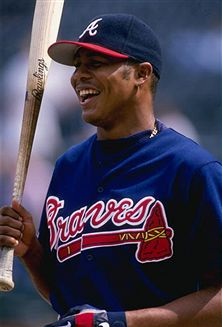 Per reader request, here is a Career Profile for Andruw Jones.

Andruw Jones was signed by the Atlanta Braves as a free agent from the Netherlands Antilles in 1993. He made his North American debut in 1994, hitting .336/.385/.448 in 36 games for Danville in the Appalachian League, with 16 stolen bases, nine walks, and 25 strikeouts in 143 at-bats at age 17. Although he was somewhat raw, scouts fell in love with his tools immediately, and he was named the Number Two prospect in the Appy League by Baseball America. They loved his glove as much as his bat. I'd probably give a similar player nowadays a Grade B at a minimum and maybe a B+.

Moved up to Macon in the South Atlantic League for 1995, Jones hit .277/.372/.512 with 41 doubles, 25 homers, 56 steals in 66 attempts, 70 walks, and 122 strikeouts in 537 at-bats. His power/speed/walks combination was excellent, he posted a +31 percent OPS, and scouting reports were terrific. He was also named Best Defensive Outfielder in the Sally League, and drew comparisons to outstanding players like Cesar Cedeno and Roberto Clemente. I was named the Top Prospect in the league (Vlad Guerrero was number two). I gave him a Grade A rating, and named him the Number Two hitting prospect in baseball behind Johnny Damon.

Despite his rapid decline at age 30, Jones' career WAR of 70.8 still ranks him 37th-All Time among outfielders, with Willie Stargell at 36th. Zack Wheat is 38th, Billy Williams is 39th, and Billy Hamilton is 40th. According to RAA, Jones has the highest outfield defensive value of all time with a 276.4 RAA; his nearest competitor is Roberto Clemente at 204. Indeed, according to RAA, Jones has the second-highest defensive value of all time, among all players at all positions, second only to Brooks Robinson (294 fielding RAA)

Most Similar Players so far: Dale Murphy, Reggie Jackson (Hall), Jose Canseco, Rocky Colavito, Shawn Green, Duke Snider (Hall), Bobby Bonds, Eddie Murray (Hall), Sammy Sosa, and Greg Luzinski. That's just based on his hitting; add in the defense and he looks like a Hall guy to me.  His Black Ink score is just 10 (average for the Hall is 27), with a Gray Ink of 47 (144) and Standards of 34 (50). However, his Monitor rating is 108 (average is 100).

If you agree with the advanced metrics about the value of Jones' defense, then there's no question that he's a Hall of Famer.