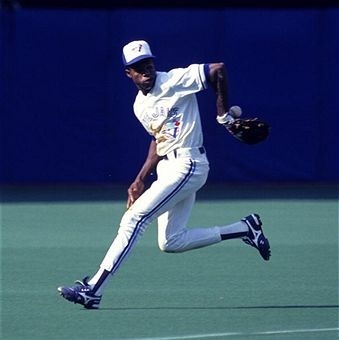 Per reader request, here is a Career Profile for Tony Fernandez.

Tony Fernandez was signed by the Toronto Blue Jays as an undrafted free agent from the Dominican Republic in 1979. He made his debut with Kinston in the High-A Carolina League at age 18 in 1980, hitting .278/.384/.332 in 62 games, stealing seven bases with a 28/17 BB/K in 187 at-bats. At this point, his assets were youth, athleticism, speed, defense, decent plate discipline, and very few strikeouts. He didn't have a lot of power, but that wasn't expected.  A similar guy now would probably get something like a Grade B- from me, maybe a Grade B, depending on exact scouting reports. It is hard to say in retrospect.

Fernandez returned to Kinston in 1981 and hit .318/.423/.407 in 75 games, with a 49/20 BB/K in 280 at-bats, along with 15 steals. He was jumped to Triple-A late in the year and hit .278/.328/.391 in 31 games, very credible given that he was just 19 years old. I don't have actual scouting reports going back that far, but I vaguely remember him being rated as a strong prospect, particularly on defense, by contemporary sources at the time. I'd likely give a similar prospect at least a Grade B now, very possibly a B+ depending on what the exact reports would be. His plate discipline was quite good and he was doing fairly well at a high level at a very young age.

Most Similar Players to Tony Fernandez: Dick Bartell, Edgar Renteria, Red Schoendienst (Hall), Alvin Dark, Dave Concepcion, Billy Herman (Hall), Mark Grudzielanek, Jimmy Dykes, Alan Trammell, and Orlando Cabrera. His Hall of Fame stats: Black Ink 3 (average Hall is 27), Gray Ink 51 (144), Monitor 75 (100), Standards 32 (50). Fernandez won't get into the Hall of Fame, but he was a really good player and isn't as far away as you might think. He's a better player than some guys who did get in.

As a prospect, Tony Fernandez was marked by athleticism, youth-relative-to-league, defense, and a very low strikeout rate.