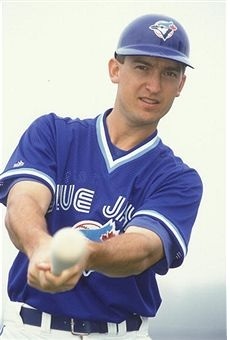 Per reader request, here is a career profile for John Olerud.

A college star at Washington State University, John Olerud entered the spring of 1989 as a virtually certain first-round pick. He was a successful two-way player in college, hitting .464 with 23 homers in 1988 but also posting a 2.49 ERA and a 15-0 record and 113/39 K/BB in 123 innings. However, his draft status became very unclear when he suffered a near-fatal brain aneurysm in January.

He got back on the field in time to hit .359 in 78 plate appearances, but no one was sure where to draft him. The Blue Jays ended up picking him in the third round, then gave him eight major league at-bats in September (he got three hits). Scouts loved his swing and felt he would be ready for the majors quickly; the main question was if the aneurysm would have some sort of lasting impact. Nowadays I'd probably give a similar player (very advanced and successful college player with a weird health issue) a Grade B+.

That was a stunning season, and he had another similar campaign in 1998 with the Mets, posting another 8.4 WAR, a .354/.447/.551 line with a 163 OPS+. Those were his two peak seasons. In between and afterward, Olerud was a very strong and at times excellent hitter, although occasionally he was (unfairly) considered a bit disappointing.  In an odd way I think his reputation suffered from what he did in '93 and '98: when you hit .360, people get disgruntled when you hit "just" .295.

In addition to his strong hitting, Olerud was a tremendous defensive first baseman, winning three Gold Gloves and posting strong-to-excellent defensive RAA values each year, even towards the end of his career.

Most Comparable Players: Will Clark, Edgar Martinez (offensively, obviously not with the glove), Mark Grace, Cecil Cooper, Paul O'Neill, Bobby Abreu, Keith Hernandez, Steve Garvey, Don Mattingly, and Wally Joyner. The Keith Hernandez comp makes a lot of sense: his OPS+ was exactly identical to Olerud's at 128, and he had a great glove, too. He is also very close on career WAR at 61.8.