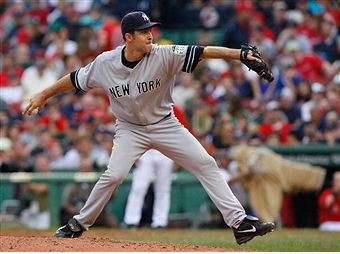 One of my favorite pitchers of the last 20 years is Mike Mussina. He's been retired for three years now, and a couple of readers requested him as a Career Profile subject.

Mike Mussina was a starting pitcher at Stanford University. In 1990, he went 14-5, 3.50 with a 111/35 K/BB ratio in 149 innings for the Cardinal, allowing 158 hits. He was considered a very advanced pitcher with a lot of polish, above-average stuff (90-94 MPH fastball, knuckle-curve, slider, changeup)  and a high level of intelligence (he graduated with a degree in economics), which was enough to get him drafted in the first round, 20th-overall, by the Baltimore Orioles.

It didn't take long. Mussina was sent to Double-A Hagerstown to begin his career right out of college, and he pitched extremely well, with a 1.49 ERA and a 40/7 K/BB in 42 innings, 34 hits allowed. He made two starts in Triple-A to finish the year, posting a 15/4 K/BB in 13 innings for Rochester. Scouting reports were as good as the numbers, pointing to Mussina's sharp command of four pitches. I would have given him a Grade A- at worst.

He won 18 games for the Orioles (2.54 ERA) in 1992, and the rest is history. Despite an aberrant ERA spike in 1996 (4.81, but that was still an above-average ERA for the year and he still won 19 games) Mussina was consistent, durable, and very effective for the next 17 seasons in Baltimore and New York. He had a few injury troubles late in his mid-30s, hardly unexpected of course, but avoided serious health problems.

Although it isn't a 100 percent slam-dunk case, it isn't really a marginal one, either: he rates as a "mid-point" Hall of Famer in my view, and I would vote for him. From a prospect perspective, Mussina's development was very rapid and without any bumps in the road.

He has me thinking about Stanford pitchers, and I am planning a piece on "Post-Mussina-Stanford-Pitchers" for next week.