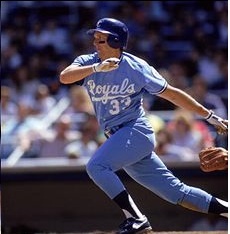 I'm not trying to go all Royals on you, but I try to be responsive to reader requests, and Kevin Seitzer was a recent request. He was an interesting player with a highly unusual minor league profile, making him a good topic for a Career Profile as we await Opening Day.

Kevin Seitzer was a college star at Division II Eastern Illinois University. He wasn't particularly big at 5-11, 180 pounds, but was a decent athlete and had thrived against smaller-school competition. The Royals picked him in the 11th round of the 1983 draft, then sent him to Butte in the Pioneer League, where he hit .345/.453/.437, with 46 walks against just 36 strikeouts in 238 at-bats. A player with this profile now (Division II star with great plate discipline, decent athleticism, an 11th-round draft slot, tearing up the Pioneer League) would get a Grade C+ from me, possibly with a sleeper notation but needing to see what he would do at higher levels.

Promoted to Charleston in the South Atlantic League in 1984, Seitzer hit .297/.432/.419 with 118 walks and 70 strikeouts in 489 at-bats, also stealing 23 bases in 28 attempts. He didn't show a ton of isolated power, but the plate discipline was amazingly good. A big problem, however, was defense: he made 50 errors in 127 games, resulting in an .878 fielding percentage at third base. A player with that profile now would probably get a Grade B- or a strong Grade C+ from me, with a very intriguing bat but serious positional doubts and possibly some concerns about power against better pitching.

Sent to Triple-A Omaha for 1986, Seitzer hit .319/.438/.507 with 89 walks and 57 strikeouts in 432 at-bats. He suddenly spiked power, with 20 doubles, 11 triples, and 13 homers. He stole 20 bases, although he was also caught 13 times. A 28-game trial with the Royals in September resulted in a .323/.440/.448 mark with a 19/14 K/BB in 96 at-bats, exactly in line with what he was doing in the minors. He played first base and outfield for Omaha and again for the Royals in September, although there was talk he would succeed George Brett in 1987 at third base. The power surge, strong major league debut, and continued outstanding strike zone judgment would have garnered him a Grade B at a minimum and possibly a Grade B+.