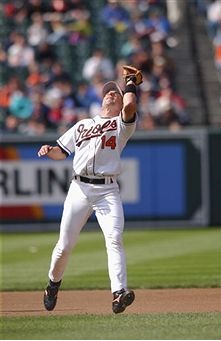 The most recent Ship Blogging Contest Winner requested a Career Profile of Mike Bordick, so here it is. This is actually an interesting case of a Grade C prospect who turned himself into a useful player.

Mike Bordick played college baseball at the University of Maine, but didn't do much to impress scouts and wasn't drafted. The Oakland Athletics signed him as an undrafted free agent in 1986, sending him to the Northwest League where he hit .257/.389/.283 in 46 games. He drew 40 walks against just 21 strikeouts in 187 at-bats. He showed no power at all, but his strike zone judgment was outstanding. I can't find any defensive statistics for him that year and I don't know what his glove reputation as at the time, but the BB/K/AB ratio would have made him at least someone to watch, albeit as a VERY deep sleeper.

Bordick moved up to Modesto in the California League in 1987, hitting .268/.377/.320 in 497 at-bats, with 87 walks and 92 strikeouts. Again, the high walk rate was the main positive on offense, and he didn't show much power. A similar player now would get a Grade C rating due to the high walk rate and ability to play the middle infield.

Promoted to Double-A Huntsville in 1988, Bordick hit .270/.384/.306 with 87 walks and just 50 strikeouts in 481 at-bats, maintaining his strike zone judgment and lowering his strikeout rate substantially despite moving up a level. He split the season between second base and shortstop, with a rather high error rate but a strong range factor. This was the point at which I first became aware of him, with the general view that he could be a future utility infielder. The lack of power (he hit just 13 doubles and two triples) was a big hindrance and he would have rated a Grade C again.

Bordick moved up to Triple-A Tacoma in 1989, hitting .240/.329/.285 in 487 at-bats with 58 walks and 51 strikeouts. Same profile: some walks, low strikeouts, no power. Being groomed as a utility infielder, he spent time at shortstop, second base, and third base, showing excellent range but (again) a high error rate. Grade C prospect and future utility infielder would be the rating here again.

The glove kept him in the lineup for a long time even when he didn't hit that well. Although he never won a Gold Glove, he was always among the league leaders in range factor, led in fielding percentage twice, ranked highly in Fielding RAA, and kept his WAR values well into the positive range almost every season. His career WAR was 24.9, with peak seasons in 1999 (4.5, almost entirely due to his defense that year) 1992 (4.2), and 1998 (3.7).

Some points to come away with from looking at Bordick's prospect history:

1) From the available minor league statistical data, he showed good range in the minors but was error-prone when younger. Eventually he improved this reliability while maintaining the range. This fits well with the principle that reliability is less important than range for young prospects.

2) With the bat, Bordick never hit for any sort of power in the minors, but he did control the strike zone well, drew walks, didn't strike out excessively, and was eventually able to turn himself into a fair hitter. This fits well with my past research showing that players with similar minor league profiles can exceed expectations in the majors.