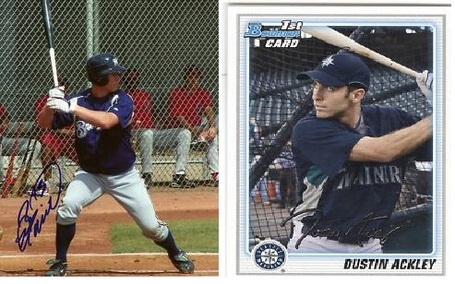 Earlier this month we did a poll question on two second base prospects, Dustin Ackley of Seattle and Brett Lawrie of Milwaukee.

This resulted in spirited (and informative) debate in the comments section. The poll itself was incredibly close: out of 1004 votes cast, 506 went to Lawrie (50.4 percent) and 498 went to Ackley (49.6%). I can't think of a previous Minor League Ball poll that came out so close, with that many votes.

Several readers have asked me who I preferred myself, so this seems like a good thing to hash out in a Prospect Smackdown.

Lawrie: Lawrie hails from Langley in British Columbia, but he was head-and-shoulders above other Canadian high school hitters, playing for the Olympic Team as a high school senior in 2008. He thrived on the showcase and touring circuits, demonstrating excellent potential with a wooden bat and earning a scholarship to Arizona State. The Brewers drafted him in the first round in '08, 16th overall, buying him out of college. Lawrie has a reputation as a hard worker as a hitter, but is also something of a mercurial personality, once described to me by a scout as an "intense red-ass player." He didn't show much interest in defense as an amateur.

Comparison: Sort of an apples/oranges thing here, given the difference in age and backgrounds, Ackley's college breakthrough against Lawrie's superior performance as a high school player despite his Canadian background. Ackley is a more mature personality at this point, and I'll give him a slight edge here, although I don't think there is anything wrong with Lawrie that growing older won't fix.

Ackley: Ackley is a 6-1, 185 pound left-handed hitter and right-handed thrower, born February 26, 1988. His best physical tool is above average speed; his overall athleticism is also above average, although he doesn't have huge raw power. His hand-eye coordination is considered exceptional. Ackley had Tommy John surgery as after his sophomore year in college, and while it didn't keep him off the field much as a junior, his throwing arm is now below average and isn't expected to improve much.

Lawrie: Lawrie is a 6-0, 213 pound right-handed hitter and thrower, born January 18, 1990. Although he has a short/strong body type, he is actually a good athlete with slightly above average running speed and a fine throwing arm. His legs look a bit thick visually and some scouts expect he'll lose speed as he gets older. He is physically stronger than Ackley and has more raw power. His hand-eye coordination is excellent and he has terrific bat speed. He has had no significant injury problems.

Comparison:  Ackley looks more athletic to the naked eye, but Lawrie is no slouch himself, has more strength, is younger, and has a better health record. I'll call this one even.

Ackley: Ackley is considered extremely polished as a hitter, with excellent contact ability and very good plate discipline. He got off to a slow start in April, hitting just .147/.289/.227 for Double-A West Tennessee, but has hit well since then, (.922 OPS in May, .838 in June) and earned a promotion to Triple-A this month, very impressive just one year out of college. On the season he's hitting .266/.383/.388 with 59 walks and 50 strikeouts in 407 plate appearances. The BB/K ratio is very sharp and augers well for his future, and he's shown gap power. He's hit just three homers, however, and while he's been efficient as a stealer (8-for-10), he hasn't been especially aggressive. A first baseman and outfielder in college, he's learning second base this year with mixed results. Given his lack of experience, his error rate isn't bad (.961 fielding percentage), but his range factors were below average for the Southern League, granted minor league defensive stats aren't that reliable. Scouts indicate that his defense is decent considering his lack of experience, and should continue to improve in time. He's working hard at it.

Lawrie: Lawrie hit .274/.348/.454 last year in the Midwest League and is at .287/.350/.453 in the Southern League this year, quite impressive for a 20-year-old. He's streaky and needs some additional polish with his plate discipline, but his explosive bat speed has held up well against older competition. He's hit just six homers after knocking 13 last year, but with 24 doubles and 13 triples to his credit, scouts expect more homers will come in time. He's swiped 27 bases but has been caught 12 times. On defense, Lawrie doesn't look like a second baseman physically, and many scouts still think he'll end up as a right fielder, not liking his footwork. But his defensive stats aren't bad; his fielding percentage is OK and his range factors are actually above average for the Southern League.

Comparison: From a scouting perspective, Ackley is a more polished hitter at this point in terms of plate discipline and feel for the zone. Lawrie has more present distance power, and his overall numbers this year were better at the same league and level. Ackley has a much superior BB/K/PA ratio, however. Ackley currently gets better defensive reviews on tools, but Lawrie's performance metrics are superior with the glove, granted the uncertainties involved with measuring defense. You can cut Ackley some slack on his slow start given that he was jumping from college ball and learning a new position. But Lawrie also deserves some slack since he's just 20 and in Double-A. I'm going with an extremely slight edge to Lawrie here, but it is really close.

Ackley: Scouts see Ackley as a future .300+ hitter with a high walk rate/OBP, 20+ stolen bases, and the kind of player who can win batting championships. Even if second base doesn't pan out, he would still be a mainstay at the top of a major league lineup.

Lawrie: Scouts see Lawrie as a potential 25 home run hitter as he matures, with some stolen bases (at least when younger) and a decent batting average and OBP. If he fully maximizes his potential, he has enough bat speed and pop to be a .300, 30-homer hitter at the highest upside. If he stays at second base and provides that sort of hitting, he'll be outstanding; if he moves to the outfield, he would still be very valuable.

Comparison: Both of these players have the natural ability to be All-Stars, although the shape of their success will likely be different, Lawrie providing more power/middle of the order production and Ackley providing more pure hitting. Lawrie is two  years younger and has more projection in the classic sense, being in a better spot on the age curve, but there is also more uncertainty about how he will develop. I will call this one even, too.

You can see why the poll results were so close. I give Ackley a slight edge on background/intangibles, call it even on physicality/tools, give Lawrie a slight edge on current performance, and call it even on future projection. If someone put a gun to my head and I had to pick one, today I would go with Lawrie since he is younger. But tomorrow I might pick Ackley.