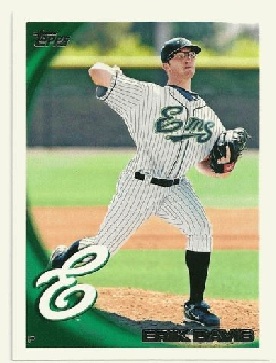 **Pitcher Erik Davis of the Padres system is a Grade C guy I've been keeping my eye on for awhile. He pitched college ball at Stanford, but was best-known for being hit in the face with a line drive during the 2006 Cape Cod League, which almost killed him and necessitated reconstructive surgery.
During his senior year in 2008, he posted a 4.70 ERA, but went 8-3 with a 103/40 K/BB in 103 innings, earning a spot in the 13th round of the draft. He has quietly pitched well in A-ball, going 16-6 with a 3.64 ERA and a 106/44 K/BB in 124 innings in the Midwest League last year, followed by a 7-2, 3.97 mark with a 65/26 K/BB at Lake Elsinore this year in 70 innings. Davis doesn't get a huge amount of attention, which is understandable since he's a 23-year-old right-hander still in A-ball. His fastball is in the 88-90 range, again not something that gets a lot of attention, but he picks up his share of grounders with sinking action, and mixes it with an effective curveball and changeup. He's overcome adversity, and it will be interesting to see how he handles the Double-A trial which should come later this year or in 2011.

**Self-knowledge is good. Despite years of sabermetric reading, I'm still a sucker for a pretty batting average on an emotional level. Call it 1970s baseball card hangover..."Roger Freed hit .398 in 1977! He must be great!" thought the ten-year-old baseball fan.
Anyway, the key is that I'm aware of this bias, and it pre-disposes me to like Royals outfielder Tim Smith, acquired in the Danny Gutierrez deal last year. He hits .300 everywhere he goes, including .310/.390/.488 this year for Double-A Northwest Arkansas. His physical tools are so-so, and scouts see him as a tweener, lacking the speed for center and the pure power desired in a corner outfielder. He does offer very good plate discipline and makes contact, witness as 17/13 BB/K in 129 at-bats this year. We need to see him in Triple-A, and a rational assessment makes him as a Grade C/C+ prospect.

**Brewers prospect Kentrail Davis was supposed to be a .300+ hitter and was drafted out of Tennessee last year in the supplemental first round with that expectation. He began this year at Brevard County in the Florida State League, resulting in a .244/.380/.341 line...he drew 17 walks in 123 at-bats and stole eight bases in ten attempts, but he hit for little power and the BA was disappointing. The Brewers sent him down to Low-A Wisconsin a couple of days ago, where he's 3-for-7 so far. I think there might be something odd going on here; he WAS controlling the strike zone pretty well, and it seems strange to pull the plug on him after just 33 games in the Florida State League. I'll see what I can find out.

**Triple-A Salt Lake lefty Will Smith had a nice start on June 14th, going 8.2 innings against Las Vegas for the win, giving up one earned run on eight hits, walking nobody, and fanning five. His overall numbers don't look so hot, though: in seven Triple-A starts, he is 2-4, 5.36 with a 26/11 K/BB ratio in 42 innings, with 55 hits allowed. Mitigating factor: he has no Double-A experience, being promoted to the PCL in mid-May directly from the California League. He's made five of his starts in the difficult Salt Lake environment, resulting in a 6.14 ERA and 46 hits in 29 innings, but in his two road starts he's been better, giving up nine hits in 12.2 innings for a 3.55 mark, granted the perils of sample size. Smith doesn't have the pure stuff to make many mistakes in thin air, working with an 88-92 MPH heater and a decent curve. He was successful in the lower minors due to his command, and still has a shot to be a fourth or fifth starter. He's only 20 years old; his main need right now is to improve his changeup.