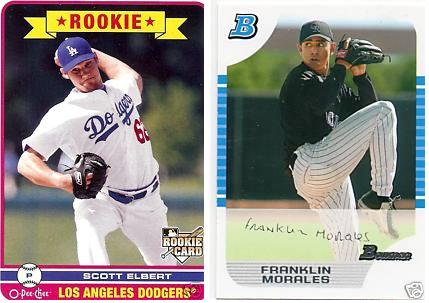 Per reader request, here is a comparison of Dodgers lefty Scott Elbert against Rockies lefty Franklin Morales. Elbert is still a rookie; Morales no longer is, but isn't exactly a fully established major league pitcher yet.

Elbert: Scott Elbert was drafted by the Dodgers in the first round in 2004, out of high school in Seneca, Missouri, where he was a star running back as well as a pitcher. Quickly establishing himself as a premium prospect, he reached Double-A in 2006, just his second full pro season, but missed most of '07 with injury. Elbert showed some lack of confidence early in his career, but overcame this and now has a reputation as a fierce competitor.

Morales: Franklin Morales was signed by the Rockies out of Venezuela in 2002. He made his North American debut in 2004 at the age of 18. After a rough beginning, he was very impressive at the A-ball levels in '05 and '06, then made his major league debut in '07 after doing well in the Texas and Pacific Coast Leagues. Early in his career, scouts reported he lost concentration at times and needed to grow up some, but by the time he reached Double-A he had a reputation as a fierce competitor. He lost his command and some confidence in '08, but made big strides regaining the touch on his pitches and reviving an aggressive mound presence in '09.

Advantage: Both pitchers were premium prospects once established. Both of them have shown strong competitive instincts and the ability to bounce back from challenges. Hard to rate this in a firm direction either way, so I'll call it even..

Elbert: A left-handed hitter and thrower, Elbert was born August 13, 1985. Listed at 6-1, 215, Elbert had surgery to clean up his labrum in 2007, then struggled with his command upon returning in '08. He was healthy last year, but converted to relief due to concerns about his durability. At his best, Elbert features a 92-94 MPH fastball, peaking at 96. He has a slider and curveball, and his changeup is a useful fourth offering, giving him a more diverse arsenal than the average reliever. Some scouts say he has a high-effort delivery and that the shoulder problems could recur if his workload isn't monitored carefully. On the other hand, he's a good overall athlete, and his stuff is certainly electric.

Morales: A left-handed hitter and thrower, Morales was born January 24, 1986. Listed at 6-1, 170, Morales had no significant injury problems in the minors, but did have trouble with a sore shoulder early in 2009. Morales has been clocked as high as 98 MPH, and works consistently in the 93-94 range. He mixes in a curveball and changeup, though he used both pitches less often after moving to relief last year. Fangraphs rates his fastball as a strong pitch, but gives both the curve and change below average ratings. From visual observation when he was in the minors, I thought his breaking ball looked quite sharp, though his command of it was inconsistent. He has some trouble keeping his mechanics in gear, which hampers his command at times.

Advantage: Elbert posted superior numbers in the minors, particularly with his strikeout and walk rates, but he also pitched in friendlier environments: the Florida State and Southern Leagues aren't as high-offense as the California and Texas Leagues. In the majors, Morales has been more effective and in a larger sample size, with an FIP almost a full run better than Elbert's. Overall both of them present as pitchers with the ability to dominate but also with control problems. You can give Elbert a small edge on minor league performance, though the difference in parks and leagues means it's not as big as it may look on the surface..

Elbert: Entering 2010, it is still unclear if Elbert will be a starter or reliever in the long run. He has the diverse arsenal to start, but there are mixed opinions about his durability: some people think he'll hold up fine under a starter's workload, but others aren't so sure. He could be a strong number three or a number two starter if everything works out, but he could also be a bullpen force and maybe even a closer if his command sharpens up.

Morales: Rockies sources including manager Jim Tracy have spoken of using Morales as a closer in the future now that his confidence is restored. He certainly has the stuff to be a dominant closer if the command is there.

Advantage: Hard to say given the uncertainty that remains about both of their future roles. Both of them have the talent to be major league closers, or number two starters, IF they throw strikes.

As you can see, this one is very close. Morales' stuff is a bit better. Elbert was better in the minors, but Morales had more difficult environments to pitch in and has been better in the majors. Both project as possible number two starters or closers if their command sharpens up. From a fantasy point of view, Elbert is probably a better choice since his pitching context will be easier. From a pure baseball point of view, regardless of park and team, I'd give Morales a very slight edge.