Where the bonuses went in the 2010 draft

Share All sharing options for: Where the bonuses went in the 2010 draft

Every year spending on the draft varies from team to team. Some years, teams spend more on high school talent, other years on college talent. Much of that depends on where the talent in the draft is in each year. This year, more talent was at the Junior College level than ever before but most of it was comprised by one player, Bryce Harper. 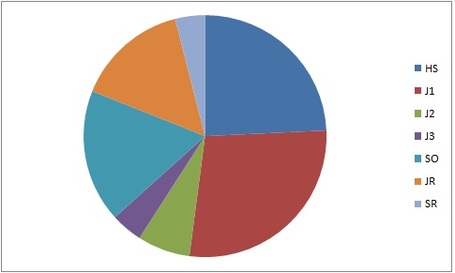 Using Baseball America's signing bonus information, I created this graph. As you can see in the picture above, almost 1/4 of the bonus money was spent on J1, or 1st year JuCo players. Nearly as much as all the high schoolers combined. The J2 tier, which is 2nd year JuCo players is much less, followed by J3, 3rd year JuCo players. It is pretty obvious that the younger you are, the more levereage you have. This carries thru with college players as well. Draft eligible sophomores got the biggest piece of the pie when it comes to college players, followed by juniors and last of all, the seniors.

This idea will never be more important than in the 2011 MLB Draft. Leverage will pay a huge role in signings as it may well be the last year in which their is not a hard slotting system in place. Will clubs use that idea against high schoolers next year, saying that it is their last season to cash in on the unrestricted signing system and they should take what they are offered and not locked into a bonus in the hard slotting system? Will teams ignore Major League Baseball's slot recommendations this summer and try to stockpile talent while they still have a chance to over pay for late round talent? I think that we will see a record amount spent on the draft this summer. What do you think?