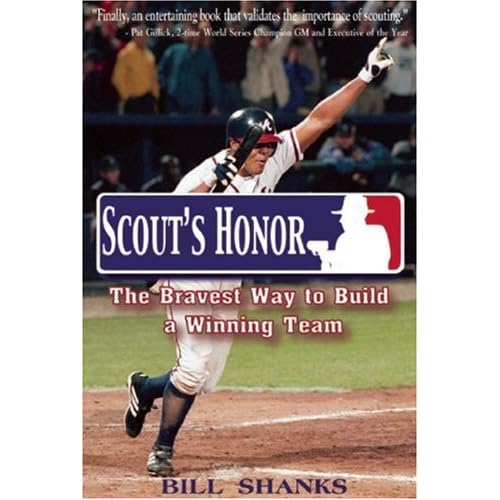 If you haven’t noticed this already, I constantly read and re-read books, articles, and blogs about baseball, with a particular focus towards anything involving drafting or scouting. It’s not the same as talking to scouts, but it gives me a fairly well-rounded picture of how drafting and scouting have ended up where they are now. Everything has a past, and scouting is no different from that.

One of the books on my bookshelf is Scout’s Honor by Bill Shanks. I’ve already read it a couple of times, but I picked it up again a couple weeks ago and decided to read it in my free time. Every time I’ve read it, there’s been something new or different that I’ve picked up on. That’s why you should always read books like that more than once. Since scouting always offers something new to build upon, and even the most experienced scout should be learning something new constantly to stay up with the game, reading a book like Scout’s Honor more than once is pretty pivotal, so I can’t exactly do the book justice in one short review.

As you can tell from the picture above, Scout’s Honor is about how the Braves built their farm system into a consistent winner at the Major League level. If you’re interested in well-written, logical arguments about why such success came to be, this really isn’t the book for you. This is what I like to call a book of personalities. You read this book to get a little glimpse into how some scouts, players, coaches, and front office men operate, not how they actually make decisions.

For example, when you read the back cover of the book, you get the impression that this book will be a thought-out response to how Moneyball portrayed scouting. Ok, that makes sense. However, when you get inside the book, there’s no evidence of how the Braves actually operate. Yes, they prefer a high school player, that’s obvious. However, you don’t get to see inside their operations at all when it comes to decision-making. Instead, the book turns into a lot of personal stories, which is why I read it. If you want to know a lot about Paul Snyder, this is your book.

Here are the positives. You get to know names and backgrounds of a lot of important scouting names. There is a lot of info about the aforementioned Snyder, Mike Arbuckle, Dick Balderson, Roy Clark, and more. That’s just the nature of the book. Get to know the names, connect them to their history, and you start to see how the Braves’ scouting and player development system started long before the Braves, actually originating back in Baltimore over 40 years ago. It has spread in different variations throughout baseball, even during the same time the Braves were starting to become farm system monsters. The Braves’ success was due to retaining a lot of important scouting and development personnel, having a substantial budget, and committing long-term to the system. They were also lucky, and the author doesn’t address this at all. Other teams tried carbon copies of this system and failed, so the general premise of this book, that the Braves are unique and that’s why they’re successful, is pretty much wrong. You can trace Arbuckle, Chuck Lamar (who Shanks clearly doesn’t like), Dean Taylor, J.J. Picollo, Frank Wren, Jack Zduriencik, Logan White, and Terry Ryan to "Brave" philosophies, and they’ve had varying degrees of success, though a lot of these names are quite popular.

The negatives of this book are quite numerous, but I’m not going to get into it too much. There are some typos and grammar mistakes, which is the biggest sticking point for me. I was really disappointed when I spent the money and found those mistakes, because I felt cheated. It wouldn’t have been a huge issue, except the content wasn’t great, either. Shanks never stops to actually address Moneyball directly, instead taking a cheap shot at Billy Beane and Michael Lewis at every chance he gets. He doesn’t address the failures of the Braves’ system, instead acting like every Braves prospect and draftee is the next big thing. Players such as Charles Thomas, Blaine Boyer, Bubba Nelson, and Jung Bong are given pages of praise, only to become flameouts. Not to mention the praise for Jeff Francoeur, who was compared endlessly to Dale Murphy. The book just lacks objectivity, and I was sad to see the whole book as one big propaganda effort for the Braves.

I loved reading all about the scouting names and how that certain system of drafting and development originated back in Baltimore. The situation in Atlanta was just a situation where things meshed well, and they had a program with a commitment from ownership. Things went right out of planning and out of luck, and that should have been addressed. If you’re interested in a book where you can read a lot of basic information on scouting and how the Braves’ scouting and player development departments came to be, this is a book for you. If you’re looking for insight or a real alternative to Moneyball, this isn’t for you. It really, really isn’t for you if you get offended by writers attacking Moneyball. If you hate reading Tracy Ringolsby, this is a less-talented version of his writing.

Don’t get me wrong. I like reading everything baseball. This just isn’t the top book on my shelf.