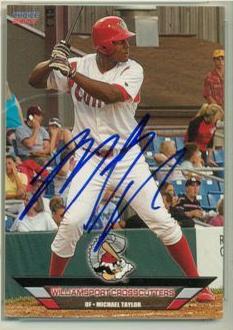 Michael Taylor was a fifth round pick in 2007 out of Stanford. Although an excellent athlete with physical strength, a strong throwing arm, and decent speed, his college performance was erratic, and he never quite lived up to expectations. He did show improved power during his junior year, hitting .335/.395/.584 with 12 homers, but a lot of scouts doubted that his swing mechanics would work with wooden bats. Indeed, he hit just .227/.300/.385 in the New York-Penn League after signing in 2007. I did put him in the 2008 book, noting his physical potential and the fact that he was very intelligent, giving him a Grade C rating.

Taylor made adjustments to his swing during '08 spring training, and the results were remarkable: he hit .361/.441/.554 in 67 games for Lakewood in the Sally League, then .329/.380/.560 in 65 games for Clearwater in the Florida State League, hitting 39 doubles, 19 homers, stealing 15 bases, and posting a 50/89 BB/K ratio in 492 at-bats last year. Scouts reported that his swing still needed some adjustments, and not everyone believed that he'd be able to repeat these numbers against advanced pitching. I wrote in the 2009 book that Taylor had long arms and might be vulnerable to inside pitches at higher levels, giving him a rather conservative Grade B rating.

The Phillies opened Taylor in Double-A this year, with outstanding results: .333/.408/.569, 15 homers, 18 steals in 22 attempts, and a 35/51 BB/K ratio in 318 at-bats. He was promoted to Triple-A last week, and so far he's 5-for-24 (.208) with two doubles, a homer, three walks, and seven strikeouts. Obviously the Triple-A sample size is too small to mean much at this point, but by the end of August we will have a better read on how he's made the adjustment. Certainly his Eastern League numbers are very much in line with what he did last year.

There are a lot of things to like about Taylor. He's always had the tools, and his skill advancement looks legitimate to me. He uses his intelligence well, studying pitchers and showing the ability to make needed adjustments with his swing and his strike zone judgment. His work ethic is highly-rated. Of course, being smart and hard-working doesn't mean you'll succeed even when you have the physical tools to go with it, but it certainly helps a lot, and right now I think Taylor deserves the benefit of the doubt. He's definitely a Grade B+ prospect at least right now, and if the end-of-season Triple-A numbers are solid he could get a Grade A-.

He turns 24 in December, so he's not a super-young prospect, giving him less future projection than a Jason Heyward or Michael Stanton. But Taylor's across-the-board tools and blossoming skills are very intriguing; he doesn't have an "old player" profile. I can see him developing into something like a cross between Hunter Pence and Mike Cameron.