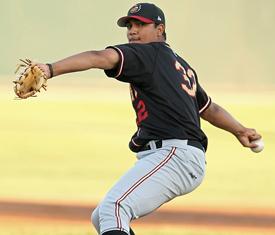 Some scouts thought he might struggle at higher levels, but so far this hasn't happened, his Double-A Transition has gone quite well: 8-6, 3.17 with an 86/35 K/BB in 102 innings for Tulsa, 87 hits with a 1.92 GO/AO. Although the GO/AO isn't as extreme, it still shows a strong ground ball tendency. Looking at his other ratios, his walk rate has risen slightly, 3.1 BB/9 this year compared to 2.5 in rookie ball, 2.4 in the Sally League, and 1.6 in the Cal League. His strikeout rate is reduced slightly from last year, 7.6 compared to 7.9 in the Sally and 8.4 in the Cal. . .it was 7.5 in the Pioneer. All of this seems like normal variation/slight ratio slippage to be expected for a guy moving up a level.

Looking more specifically at the 2009 splits, he had a rough start with a 4.87 ERA and just 12 strikeouts in 20 innings in April, but his strikeout rate has been on an upward trend since then and he's pitched very well in May, June, and July. His other splits are nondescript; lefties have a slight platoon edge (.239 vs. 217 for right-handers) but it is nothing out of the ordinary.

Basically his Double-A transition is going very well, and I don't see anything to make me change my rating of him. As long as he remains healthy, Chacin projects as a solid starting pitcher. He could stand to improve his control some, and I'd like to see him get at least a half season of Triple-A under his belt before he gets to the majors sometime in 2010. At age 21, there is no need to rush him.