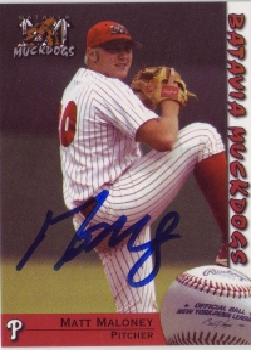 The Reds are expected to promote Matt Maloney to the majors tonight, so that he can start on Saturday against the Cubs. Who is Maloney and what can we expect from him?

Matt Maloney was drafted by the Phillies in the third round in 2005, from the University of Mississippi. He was very successful in college, posting a 3.11 ERA with a 111/26 K/BB in 104 innings his junior year, but lasted until the third round due to an average fastball. He performed fairly well in short-season ball, with a 3.89 ERA and a 36/15 K/BB in 37 innings for Batavia in the New York-Penn League. I gave him a Grade C+ in the 2006 book, writing that as a college-trained finesse pitcher, he should do well in A-ball, but that Double-A would be the real test.

The Phillies sent Maloney to Lakewood in the Sally League in '06. He was brilliant, going 16-9, 2.03 with a 180/73 K/BB in 169 innings, 120 hits allowed. The walk rate was higher than ideal, but his K/IP and hit rates were excellent, even though his fastball was just 85-89 MPH. His curve, slider, and changeup were all solid. I gave him a Grade B- in the '07 book, still wondering how he would transition to Double-A.

Maloney's velocity picked up a bit in '07, still not great at 86-91. But his slider and changeup improved, and his command proved very strong even against advanced minor league competition. I gave him a Grade B in the 2008 book, writing that he was one of my favorite finesse pitchers.

Assigned to Triple-A to begin 2008, he went 11-5 and posted a fine 132/39 K/BB in 140 innings. His hit rate went up and he gave up 18 homers, boosting his ERA to 4.68. Despite this, I was still pretty sanguine about him in the book this year, writing that "I like Maloney more than most other analysts do" and that he could be a decent number four starter. I also warned that he had no clear opportunity in Cincinnati. I did lower his rating to Grade C+.

Maloney has been terrific for Louisville this year, with a 2.00 ERA and a 58/9 K/BB in 67 innings with 60 hits allowed. He was particularly outstanding in his last start, fanning 10 with zero walks and just three hits against Scranton on June 1st.  Maloney is getting his chance in the majors now. Questions to consider: how will his command transition to the majors? Will his fly ball tendencies result in excessive home runs in the majors?

Although he doesn't have the hot fastball, his K/IP and hit rates are those of a power pitcher, and that's a very positive sign. He has nothing left to prove at the minor league level. Given sufficient adjustment time, I think he will surprise some people. Prediction for his first start: 6 innings, 6 hits, 2 runs, one homer allowed, one walk, three strikeouts, victory.