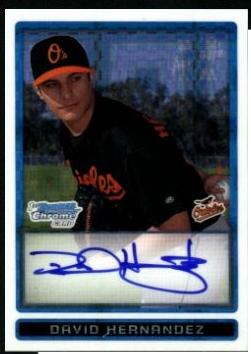 David Hernandez was drafted in the 16th round in 2005, out of Cosumnes River Community College in California. His pro debut in the New York-Penn League was successful: 3.89 ERA with a 47/17 K/BB in 42 innings, 41 hits allowed. I noticed him because of his strong K/IP ratio and put him in the 2006 book, rating him as a Grade C prospect but thinking of him as someone to watch, due to his 90+ fastball and a potentially good slider.

Promoted to the Sally League in 2006, Hernandez made 28 starts and went 7-8, 4.15 with a 154/71 K/BB in 145 innings, with 134 hits. The slider reportedly improved, and he maintained the strong strikeout rate at the higher level. His walks were high, but I remained intrigued with his potential, giving him another Grade C but noting that if he sharpened his command, he could take a big step forward in '07.

Moved up to the Carolina League in '07, Hernandez posted an unattractive 4.95 ERA and a lot of people stopped paying attention to him. However, if you look at it, he actually had a very good year in other respects: 168/47 K/BB in 145 innings, 139 hits allowed. His walk rate got much better; his strikeout rate improved; the hit rate was almost the same. He gave up three additional home runs, which wasn't enough really to account for the ERA increase. The ERA bump looked like a fluke to me. I kept him at Grade C in the '08 book, but put a big "SLEEPER ALERT" on his comment and wrote that he was a candidate for a surprise season.

Scouts have never warmed up to Hernandez as much as you might think. He has good stuff: 90-94 MPH fastball, and a hard slider. The slider is a plus pitch when it's working right. His changeup is mediocre, but he racks up the Ks like mad when the fastball and slider are on. His delivery is deceptive, which adds to the package. But scouts aren't wild about his physical build (listed at 6-2, 180 when he signed but currently at 6-3, 215) and the so-so changeup makes many of them think he should be a reliever, not a starter. On the other hand, he's been extremely durable to this point in his career. I also think there has been some scoutgroupthink going on in regards to Hernandez.

I think the Orioles have handled him well, moving him up one level at a time and letting him build innings and experience. Given his Triple-A performance (including a 14-strikeout game in his last start on May 22nd), I don't think he has a lot left to learn in the minors, and at age 24 this is the ideal time for a trial. I can see him developing into a solid three/four starter if the changeup can improve a bit more, or into an excellent short reliever if it doesn't.