Not a Rookie: David Murphy

Share All sharing options for: Not a Rookie: David Murphy 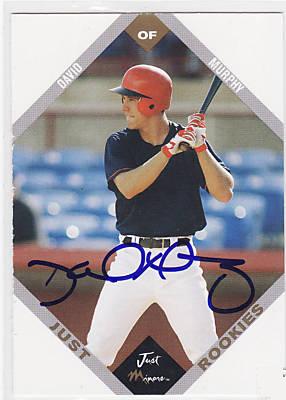 Not a Rookie: David Murphy

David Murphy was drafted by the Boston Red Sox in the first round in 2003, out of Baylor. The 17th overall pick, he was considered a mild overdraft by many experts, as a lot of teams saw him as a second round talent rather than a first rounder. He had solid tools across the board and was polished, but there were questions about how much power he'd show with wood. He hit .346/.453/.397 in 21 games in the New York-Penn League after signing, but just .242/.329/.307 in 45 games in the Florida State League. Having seen him quite a bit in college, and considering the FSL to be a big jump from Baylor,I was optimistic at the time and gave him a Grade B in the 2004 book.

Murphy's 2004 season was disappointing. He hit just .261/.323/.346 in 73 games for Sarasota in the Florida State League, however he was hampered by a painful foot injury most of the season, and was never 100% physically. Even accounting for the injury, scouts were panning his power, and his strike zone judgment wasn't great. I gave him a Grade C in the '05 book, but noted that it wasn't quite fair to judge him until we got to see what he could do with better health.

He got the better health in '05, playing 135 games for Double-A Portland, hitting .275/.337/.430, okay but hardly outstanding performance. I wrote, "if you watch him play, he looks like a hitter: smooth swing, makes contact, doesn't swing at many bad pitches. But so far at least the numbers just aren't there. He works hard and is reasonably good on defense, but if he wants to be a regular he's got to boost the hitting." I gave him another Grade C, and was projecting him as a reserve outfielder.

What should we expect going forward? Is Murphy a good candidate for an age-27 performance spike this year? Looking at some projection systems:

PECOTA is the least optimistic. James, unusually, is NOT the optimistic outlier this time. However, all of these projections are completely reasonable outcomes. No one seems to anticipate a performance spike beyond where he currently is.

Looking at comparable players, the top PECOTA comp is Paul O'Neill, which is intriguing given the fact that PECOTA doesn't like Murphy much for '09. Others include George Altman, Ben Broussard, Jim Northrup, Chris Richard, Brant Brown, Ricky Ledee, and Trot Nixon. Sim Scores bring up different names, Brian Giles, Rusty Greer, and Al Martin being the top three. The Greer comp is interesting: he hit .271/.355/.424, OPS+100 for the Rangers in 1995 at age 26, not far off of Murphy's .275/.321/.465/, OPS+106 mark last year. Greer broke through at age 27.

Generally, I agree with the consensus regarding 2009, though I think he's capable of adding a bit more OBP as he gains experience. Murphy should have a long career as a platoon/fourth outfielder, perhaps not living up to the expectations created by his draft status and his '07 outburst, but certainly a player with value. If he can boost his production against lefties, there's still a shot he could do something Greer-like.