The Cliff Lee piece triggered some memories in my brain regarding southpaws. This doesn't have much to do with prospects, but I thought it was a worthwhile Sunday diversion. Here are my Four Favorite Minnesota Twins left-handers of all time. This is not a list of BEST pitchers. These are just my personal favorites for one reason or another. 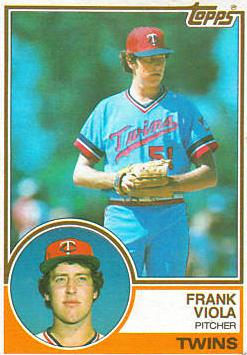 1) Frank Viola
The 1982 and 1983 Twins were young and talented teams. They didn't win many games, but the nucleus of future success was there: Kent Hrbek, Gary Gaetti, Tom Brunansky. . .there was a good core here. The pitching wasn't very good, which held the team back. Frank Viola, one year out of college, went 4-10, 5.21 in 22 starts, but he seemed to have the best arm among the starters. He struggled again in '83, but in '84 he broke out with an 18-12, 3.21 season. His breakthrough and the arrival of a young energetic outfielder named Kirby Puckett kept the Twins in first place for much of the season, until a final collapse dropped them to an 81-81 record. Viola was also the ace of the 1987 World Championship team. He is my favorite Twins lefty because, once he broke through in ‘84 he was the first YOUNG Twins pitcher I remembered who didn't scare me every time he took the mound. He was a pleasure to watch. 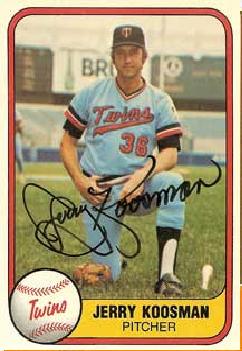 2) Jerry Koosman
Minnesota native Koosman was famous for his days with the Mets, but after going 11-35 combined between 1977 and 1978, he wanted out. The Mets were happy to oblige his desire to return to his home state team, shipping him to Minnesota for a young prospect named Jesse Orosco. Koosman revived his career by going 20-13, 3.38 for the Twins in '79, then won 16 more in 1980. He was old but it was nice to have a still-solid "big name" pitcher on the mound for two years. Alas, it didn't last long: Calvin Griffith, strapped for cash as always, shipped the expensive Koosman to Chicago in the 1981 strike season. 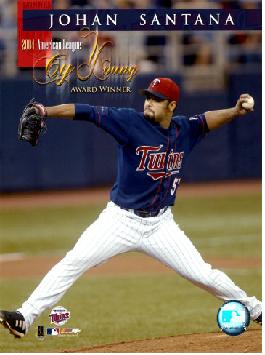 3) Johan Santana
What more can you say about this guy? Although I have less emotional connection to him than I do to Viola or Koosman, Santana was the best pitcher in Twins history, and a brilliant piece of player acquisition (Rule 5) and development (started as a swingman, Earl Weaver style usage of a young pitcher).. He has Hall of Fame talent, if he lasts long enough, which admittedly is always an open question. 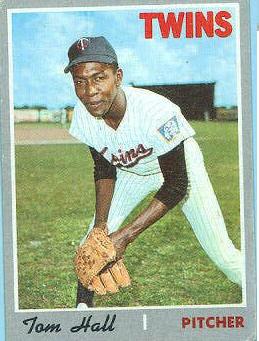 4) Tom Hall
I never actually saw Tom Hall pitch. . .he was way before my time. But for some reason I thought his baseball card was very cool, and there was always something I found aesthetically pleasing about his statistical lines. He was good in the minors, too, going 14-5, 2.16 with a 177/48 K/BB in 167 innings for Wisconsin Rapids in 1967 for example. I liked his high strikeout rate, and the fact that he saw successful service as a swingman for several years, pitching well as both a starter and reliever. Did anyone here see him pitch?