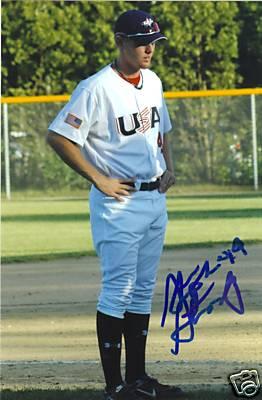 Several people have asked me to weigh in on Stephen Strasburg, the San Diego State right-hander expected to be the top talent in the 2009 draft.

Scouting reports on Strasburg are a series of superlatives. He's got a strong pitcher's frame at 6-4, 220, and has gotten himself in much better physical condition after drawing concerns about his weight and being "soft" when younger. He works at 95-97 MPH, has hit 100 a few times, and shows movement on the fastball. HIs breaking ball and changeup are above average, and he has exceptional command and control for a power pitcher.. Scouts also like his mound presence and overall pitching instincts.

Performance-wise, Strasburg has been outstanding: he posted a 1.57 ERA with a 133/16 K/BB ratio in 97 innings last year, 61 hits allowed, obviously outstanding performance at any level. This year he's been even better in two starts: 12.1 innings, 1.46 ERA, 27/3 K/BB, eight hits allowed. If he stays healthy this spring, and has non-insane bonus demands, Strasburg is the current favorite to go number one overall due to this combination of stuff, command, and performance.

So, how does he rank in comparison to other prospects? I've received many questions about where Strasburg would rank among current minor league pitching prospects. This is a difficult question since he hasn't pitched pro ball yet, and I tend to be conservative about players like that. On my Top 50 in the book, I think I would slot him at Number Four, behind Madison Bumgarner but ahead of Trevor Cahill and Rick Porcello. On a Top 100 list, he would rank in the 8-12 range.

Strasburg is all the rage,and with reason, but keep in mind that being "a polished college pitcher with great stuff and great command" doesn't mean you will be a great pro. It certainly helps load the odds in your favor, but you still have to throw the dice, and as the examples of Paul Wilson and Mark Prior show, you may still come up snake-eyes if injuries strike.

On that note, Kyle Boddy at Driveline Mechanics, part of SB Nation, has an interesting (and none-too-optimistic) breakdown of Strasburg's delivery last fall which you can find here.