Not a Rookie: Sean Gallagher

Share All sharing options for: Not a Rookie: Sean Gallagher 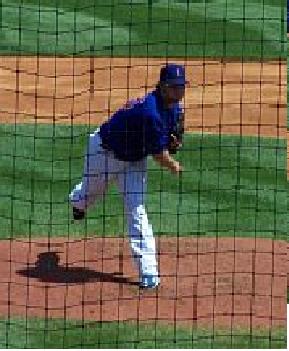 Not a Rookie: Sean Gallagher

Sean Gallagher was drafted by the Chicago Cubs in the 12th round in 2004, out of high school in Fort Lauderdale, Florida. His stuff was rated as average (87-90 MPH fastball, decent curve) and he wasn't physically projectable at 6-1, 210, but he had a good feel for pitching and performed well in rookie ball, with a 3.12 ERA and a 44/11 K/BB in 35 innings. I put him in the 2005 book, with a Grade C, noting him as a long-term sleeper prospect worthy of notice.

Gallagher lived up to that with a strong 2005 campaign in the Midwest League, going 14-5, 2.71 with a 139/55 K/BB in 146 innings for Peoria, allowing just 107 hits. His component ratios were all well above league marks, but scouts weren't overly excited about him due to his 87-90 MPH fastball. His curve, slider, and changeup all showed improvement, however, and it was impossible to knock the numbers. I gave him a Grade B in the 2006 book, writing that I was optimistic about him as long as he remained healthy.

The Cubs sent Gallagher to the Florida State League for 2006, where he posted a 2.30 ERA with an 80/21 K/BB in 78 innings. Promoted to Double-A at mid-season, he posted a 2.71 ERA with a 91/55 K/BB in 86 innings. Note how his K/IP remained very strong, but his walk rate spiked in Double-A, warning that he needed to make some adjustments. His velocity improved into the 90-93 range, so scouts started to give him better reports. I gave him another Grade B, projecting him as an inning-eater, number three type starter.

Gallagher spent most of 2008 in the majors, going 3-4, 4.45 with a 49/22 K/BB in 59 innings for the Cubs, then 2-3, 5.88 with a 54/36 K/BB in 57 innings after being traded to the Athletics. His walk rate spiked after the trade, but his other numbers stayed about the same. I suspect he just needs more time to adjust, and that as long as he remains healthy, he will still be an effective number three/four starter down the line.

PECOTA comps seem to back this up: Jeff Russell, Ryan Dempster, Jim Gott, Dave Borkowski, Moe Drabowsky, Brad Penny, Ray Culp, Tom Seaver (!), Geremi Gonzalez, Steve Dunning, Jose Rijo, and Mickey Lolich make up the top dozen, with Sidney Ponson, Dennis Martinez, and Jake Peavy also making appearances. Most of these guys were good pitchers, though their durability varied. A maximal, Seaver-like outcome seems unlikely, but there are some very good pitchers on this list, testifying to Gallagher's potential. He's not a PECOTA comp, but I could also see Jeff Suppan as an inning-eating model for Gallagher.