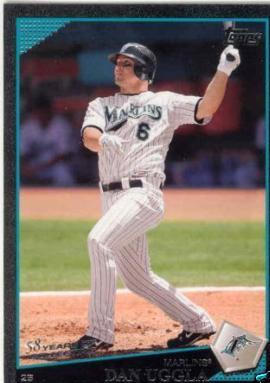 Dan Uggla was drafted by Arizona in the 11th round in 2001, from the University of Memphis. He performed well in college, hitting .379/.498/.790 with 18 homers, 42 walks, and 39 strikeouts in 214 at-bats in his draft season, but wasn't considered a hot prospect due to lack of size and tools. He hit .277/.341/.406 in 72 games for Yakima in the Northwest League after signing, OK but not excellent performance, and his plate discipline was rather mediocre with 20 walks against 52 strikeouts. I didn't rate short-season guys back then, but he would have been a Grade C, a successful college player who would likely need adjustment time at higher levels.

2005 saw him hit .297/.378/.502 for Double-A Tennessee, much better performance obviously than what he'd done in the Texas League.. He hit 21 homers, stole 15 bases, and showed adequate plate discipline. I gave him a Grade C in the 2006 book, noting that he had made adjustments and had good pop for a middle infielder. His defense wasn't highly-regarded, and given that he was 26 entering 2006 I saw no reason to think he would be especially interesting. I gave him another Grade C, noting that he had been selected by Florida in the Rule 5 draft and would "deserve a trial on a major league bench." I thought he could be a solid utility guy.

So what explains it? Scouts have always loved Uggla's work ethic and saw him as a "gritty" type. His minor league performance was somewhat erratic, needing time to adjust to new levels, but once he did adjust he was productive. Nevertheless, in the majors he's exceeded what could have been expected based on his minor league record, and I don't have any real explanation for it. Lots of guys have great makeup; few exceed expectations like this.

His Sim Scores are weird, with a bunch of catchers showing up: Carlton Fisk, Mike Lieberthal, Johnny Romano, Ed Bailey, Jorge Posada, Jeff Kent, John Valentin, Al Rosen, Jody Davis, Tim Teufel being the Top 10. Throw the catchers out and that gives you infielders Kent, Valentin, Rosen, and Teufel. The only one of the infielders who was effective beyond age 32 was Kent, so it will be interesting to see how long Uggla can last at his current level of production.