Share All sharing options for: Atlanta Braves Top 20 Prospects for 2010 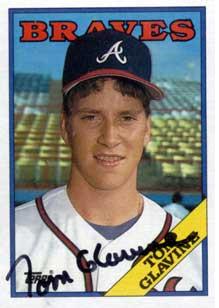 All grades are EXTREMELY PRELIMINARY and subject to change. Don't get too worried about exact rankings at this point, especially once you get beyond the Top 10. Grade C+/C guys are pretty interchangeable depending on what you want to emphasize.

Feel free to critique the list, but use logic and reason rather than polemics to do so. The list and grades are based on a blending of present performance and long-term potential. Full reports on all these players can be found in the 2010 Baseball Prospect Book, now available for pre-order..

2) Freddie Freeman, 1B, Grade B+: We'll have to see if the wrist injury cuts into his power development, but given his age he gets some slack.

3) Julio Teheran, RHP, Grade B: I still worry about his health and durability.

4) Randall Delgado, RHP, Grade B: A rare thing, an Atlanta pitching prospect that might be underrated. Usually Braves guys get too much hype.

5) Arodys Vizcaino, RHP, Grade B: Acquired from the Yankees in the Vazquez deal, Vizcaino provides another outstanding young arm for the lower levels of the system.

6) Craig Kimbrel, RHP, Grade B: If his command holds up he can be a bullpen force.

7) Mike Minor, LHP, Grade B-: Borderline Grade B. Excellent pitchability with pretty good stuff. I hope I get to see him in Arizona Fall League.

9) Zeke Spruill, RHP, Grade B-: Younger and more projectable than Hoover, but I worry about his durability.

11) David Hale, RHP, Grade C+: Power arm from Princeton, another possible relief mainstay if the command is there.

13) Brett DeVall, LHP, Grade C+: Would rank higher if not for questions about health.

15) Adam Milligan, OF, Grade C+: Great numbers in his pro debut, scouting reports are mixed, poor BB/K ratio is a caution flag. Could rank as high as 11th.

16) Michael Dunn, LHP, Grade C+: Acquired from the Yankees in the Vazquez deal, Dunn provides a power arm to help in the 2010 major league pen.

19) Cody Johnson, OF, Grade C+:  Enormous power potential but with huge holes in his game.

20) Luis Valdez, RHP, Grade C+: Older prospect, scouts don't love him, but has been great in the upper minors and could help in the pen. Might knock him down to a Grade C.

21) Scott Diamond, LHP, Grade C: Like Osuna and Ortegano, he could appear in the majors as soon as 2010. Doesn't have great stuff, but could be useful under the right circumstances.

22) Dimaster Delgado, LHP, Grade C: Good numbers in the Sally League, but another mediocre-stuff lefty according to the reports I have.

I ended up writing about 40 guys, but I have to say that I'm not overly impressed with this system. They have a near-certain superstar in Heyward, a good first base prospect in Freeman, and then a huge bunch of questionmarks. The lack of offensive talent beyond the two elite guys is very striking. I do not believe in Cody Johnson. I think the strikeouts are going to eat him alive.

Even the pitching, historically the strength of the system, strikes me as overrated compared to the "pitching factory" reputation. There are a whole bunch of projectable young arms at the lower levels, but even the best ones (Teheran, R. Delgado) still have a lot to prove. There is the raw material for a good bullpen here (Kimbrel, Gearrin, Hale), and Minor looks like a solid strike-thrower who will advance rapidly. I love Hoover but we really need to see him outside the Sally League. They'll probably get one usable pitcher out of the finesse lefty group (Ortegano, Osuna, Diamond, D. Delgado) but I don't know which one it will be. I also have no idea how to rank Rohrbaugh at this stage. You could interchange him with any of the last three.

This is only the second team I've done, so it will be interesting to see how they compare to other organizations and perhaps I'm being too hard on them. As always, I'm open to suggestions and discussion, and will to back and revisit the grades as I get further into the book process.