Share All sharing options for: Detroit Tigers Top 20 Prospects for 2009 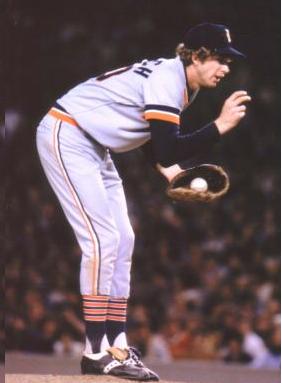 1) Rick Porcello, RHP, Grade A-: Went back and forth on this one due to the K/IP issue, but ultimately decided to give him the benefit of the doubt due to his youth. More of a Webb/Zambrano type than a Beckett.

2) Ryan Perry, RHP, Grade B: Best of the power bullpen arms the Tigers drafted in 2009.

3) Brett Jacobson, RHP, Grade B-: Second-best of the power arms. Stuff not quite as good as Perry but better command.

4) Casey Crosby, LHP, Grade C+: I want to see some actual data beyond the GCL, but fall reports are promising. Much higher ceiling but concerned about command.

5) Jeff Larish, 1B, Grade C+: I don’t buy him as a third baseman, which makes him trade bait. I believe in the power, but won’t hit for average.

6) Cody Satterwhite, RHP, Grade C+: Another impressive power arm. The Tigers gathered a bunch of these for the future pen. Command an issue.

7) Wilkin Ramirez, OF, Grade C+: Put some of his tools together last year, but the high strikeout rate and problems with breaking balls remain serious concerns.

9) Casper Wells, OF, Grade C+: Added to 40-man roster after surprisingly good 2008 season, an under the radar guy who produced power and speed.

10) Alex Avila, C, Grade C+: Strong bat, I think more power will come, not sure about where he fits defensively.

13) Chris Lambert, RHP, Grade C+: Ex-Cardinal prospect revived career after trade, looks like he can be a useful inning-eater type.

14) Luis Marte, RHP, Grade C+: Another power arm, struggled in Double-A but I think he has some sleeper potential.

16) Cale Iorg, SS, Grade C: Ranked 3rd on the BA list, but I am extremely skeptical about his bat. I just don’t buy the “future all star” hype. I could be wrong, but his brother Eli has exactly the same weaknesses and looks like a failed prospect. Their scouting reports were quite similar at the same stage. If his name was “Cale Jones” instead of “Cale Iorg the son of a major leaguer,” would he have the same reputation?

17) Scott Sizemore, 2B, Grade C: I’m not convinced about his bat, either, and he doesn’t have Iorg’s athleticism and defensive skills to fall back on. Am I underrating him?

18) William Rhymes, 2B, Grade C: Will hit for average, but old for a prospect, looks like a good role player.

The Tigers have a weird system: they have one impact talent (Porcello), then a whole slew of power bullpen arms. Their position players are either future role players, or “future regulars” who are (in my opinion) dramatically overrated by other sources. I could be wrong, but given the totality of their track records I just don’t buy Cale Iorg and Dusty Ryan as future lineup mainstays for a good team. The guys with tools (Iorg, Ramirez, Ryan) have severe strike zone/contact problems, while the more polished guys lack tools. One possible exception is Casper Wells, who no one is talking about but who performed well in an across-the-board way in 2008. He seems to do a lot of things well, but I’d like more data about him. Wells might pull a Matt Joyce on us.

I do like the collection of arms they have gathered, not just the big names from the 2008 draft, but also under-the-radar guys like Darrow, Fien, Marte, and Figaro. There should be plenty of parts for the bullpen soon, but they need someone to start games besides Porcello.

I expect I might actually get more flack some of the C+/C ratings than I will for the Grade A- for Porcello. I know the strikeout issue is important, but given his age I suspect that will resolve itself in time. I have gone back and forth on the grade several times, and I suppose it might change again before the book goes to press next week. As I see it, trying to grade Porcello involves threading a needle between excessive devotion to sabermetric orthodoxy (the K/IP problem) and buying into traditionalist groupthink. I’m doing my best to be purely logical about it, and my logic says (right now anyway) that given his age, experience level, and projectability, that he did just fine last year. I would be more worried if he hadn’t put up the strong GO/AO mark.