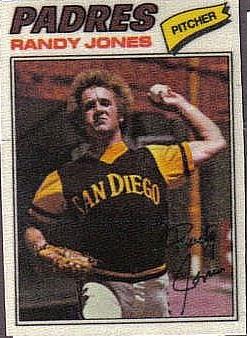 1) Kyle Blanks, 1B, Grade B+: I don’t know where he fits except as trade bait, but I’m convinced that the bat is real. Considered Grade B, but that’s what I gave him last year and he improved in ’08.
2) Jaff Decker, OF, Grade B: Need to see at higher levels, could be a cross between Brian Giles and Matt Stairs.
3) Mat Latos, RHP, Grade B: I believe in his ceiling, and while the intercostal injury is annoying, he pitched very well when on the mound.
4) Kellen Kulbacki, OF, Grade B: The Winner of the 2009 Josh Willingham Award, given to a guy who can really f**king hit, but who doesn’t get as much respect as he deserves due to lack of tools.
5) Cedric Hunter, OF, Grade B-: Improved slightly compared to ’07. Young, hits liners, Double-A will tell us a lot.
6) James Darnell, 3B-OF, Grade B-: Although drafted behind Allan Dykstra, his balance of tools and skills is likely more valuable in the long run.
7) Allan Dykstra, 1B, Grade B-: Will hit homers and draw walks, but where does he play?
8) Will Inman, RHP, Grade B-: Continues to defy the scouts. Needs to lower the walk rate but K/IP continues to stand out. Considering downgrade to C+.
9) Wade LeBlanc, LHP, Grade C+: Hammered in the majors, but will get more chances. Finesse lefty with thin margin of error.
10) Matt Antonelli, 2B, Grade C+: A very difficult grade and ranking. Despite horrible season, he continued to control the strike zone very well. Hard to know what to think here.
11) Eric Sogard, 2B, Grade C+: Excellent secondary skills. Needs to repeat this in Double-A.
12) Jonathan Galvez, SS, Grade C+: Very hard to know where to rank these DSL guys. Could rank as high as 9th if you are going just for tools and youth. Could be much higher next year.
13) Simon Castro, RHP, Grade C+: Hard-throwing right-hander is a breakthrough candidate. Not sure why he doesn’t get more attention.
14) Cole Figueroa, 2B, Grade C+: Another relatively polished college bat. Would like larger sample size, potential to rank higher next year.
15) Adis Portillo, RHP, Grade C+: Pitching version of Galvez….very young, talented, but very far away.
16) Blake Tekotte, OF, Grade C+: Another guy with strong baseball skills but needs to repeat at higher levels.
17) Jeremy Hefner, RHP, Grade C+: Sleeper from 2007 draft had a very fine year in A-ball, good components.
18) Josh Geer, RHP, Grade C+: Could be a nice strike-throwing fourth starter if his elbow holds up.
19) Logan Forsythe, 3B, Grade C+: Good glove, polished bat, lack of power could make him a Joe Randa type.
20) Will Venable, OF, Grade C: Looks like a fourth outfielder.

NOTE TO READERS:
These aren’t supposed to be detailed reports, folks, these are preliminary grades from the book and thumbnail blurbs. The book has more detail.

Another point: as stated numerous times, these grades are PRELIMINARY. That means they are not final. That means I am still thinking about them. That means I will go back and review every grade before the book goes to press, to make sure that no one gets screwed on a grade just because I’m in a bad mood or exhausted or something.

SYSTEM IN BRIEF
I expected this system to be thin, but if you sit down and look at it, it is not as bad as people say. There is a definite lack of sure-fire stars, but there is considerable depth in C+ types.
Of the Bs, Blanks looks like he can be a solid first baseman, and Decker’s bat could be very special indeed. Kulbacki, Darnell, Hunter, and Dykstra should all be contributors in one way or another, and all of them have a chance to be regulars. I remain highly intrigued with Latos, if only he can stay healthy. I like Inman more than the scouts do, and yes I have seen him in person. He’s got flaws and I might go down to C+, but there is just something about him that makes me think he will continue to surprise people. We will see if that remains true in the PCL.
Antonelli is a huge enigma, and no I don’t know what to expect.
The mass of Grade C+/C guys has a whole lot of players who could be useful role players, with a few high ceiling/high risk guys (Castro, Galvez, Portillo) mixed in.
Overall this system needs more impact talent, especially on the pitching side, but it is not as bad as it’s reputation, and I kept finding guys that I didn’t want to leave out. As it stands I will probably have to cut some of the Cs.