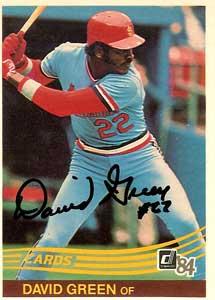 1) Colby Rasmus, OF, Grade A-: I’m going to cut him some slack due to youth. Power, speed, walks, defense are all still here. Not going to hit for a great average right away.

2) Brett Wallace, 3B, Grade A-: Monster bat should be ready within a year. Glove at third should be adequate in the short run.

4) Daryl Jones, OF, Grade B: I buy into the improvement being real. Has always had the tools and skills improved rapidly this year. This is an aggressive grade but I’m comfortable with it.

5) Jess Todd, RHP, Grade B-: Strike-throwing inning-eater type if used as a starter, could be more dominant in shorter stretches if used in pen.

6) Jon Jay, OF, Grade B-: I like him more than a lot of people, but I think he can play center and put up solid numbers. Another aggressive grade, but both Jay and Jones have impressed me and I think both tend to be underrated..

8) Bryan Anderson, C, Grade C+: This ranking may surprise some, but I’m starting to wonder if we could be looking at a Sean Burroughs situation here, where the line drive bat just kind of stalls at an early age. Am I overreacting?

9) Mitchell Boggs, RHP, Grade C+: Live arm, still trying to put everything together, another guy who could be a decent starter or dominate more in the pen.

11) Pete Kozma, SS, Grade C+: I rather like him and I think he might end up being a better hitter than people think.

12) David Freese, 3B, Grade C+: An older prospect and plate discipline looks spotty, but he has power and a good glove at third.

14) Allen Craig, 3B, Grade C+: A personal favorite, could rank as high as 9 or 10 depending on criteria. I think he’ll hit, though glove isn’t the best and he’s got a lot of competition.

15) Lance Lynn, RHP, Grade C+: Polished college pitcher, could rank much higher once we see him against better hitters.

17) Clayton Mortensen, RHP, Grade C+: Gets grounders, could be an inning-eater, but strikes me as overrated by some other sources.

21) Deryk Hooker, RHP, Grade C+: Another young sleeper, and a breakthrough candidate for 2009.

23) Shane Peterson, OF, Grade C+: High OBP college guy with gap power, but not many homers.

I’ve received criticism lately about these lists being “incomplete” and not detailed enough. These aren’t supposed to be in-depth reports, folks, these are preliminary grades from the book and thumbnail blurbs. That is what "full reports are in the book" means. I thought everyone understood that.

The Cardinals system is rapidly improving. Rasmus, Wallace, and Perez all have strong impact potential, and the B/B- guys all look like useful role players at least and possibly regulars.

After that you have a gigantic mass of Grade C+ prospects that are difficult to rank. Some of these Grade C+ guys look like role players, but others could end up with much higher grades next year once we get more data. The Cardinals continue to focus on college guys in the draft, but are now popping an occasional high school ceiling player (Kozma, Vasquez, Hooker, ) in there to provide more balance..They are also focusing more on , putting down more money on tools bets like De La Cruz and Mannbell. This mixed approach should provide dividends and has already boosted depth.

Overall I think Cardinals fans should be optimistic about the way this system is going.