Share All sharing options for: Seattle Mariners Top 20 Prospects for 2009 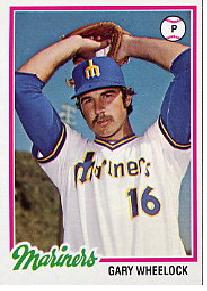 The first Seattle Mariners card I ever owned

1) Carlos Triunfel, INF, Grade B+: He has flaws, but holding your own in the Cal League at age 18 is special. High risk, high reward.

2) Greg Halman, OF, Grade B: Another high risk/high reward guy, awesome power/speed potential but huge problems with breaking balls. Could be a B+ but high risk of failure and 2.5 years older than Triunfel.

3) Phillipe Aumont, RHP, Grade B: Impressive arm and good numbers in the Midwest League, but too raw to get a B+.

4) Juan Ramirez, RHP, Grade B: Another live arm who did well at the lower levels but needs additional refinement.

5) Michael Pineda, RHP, Grade B: Doesn’t throw quite as hard as Aumont and Ramirez, but better command.

6) Michael Saunders, OF, Grade B-: Good tools, skills coming along, but high strikeout rate is concerning.

9) Dennis Raben, OF, Grade B-: Love the power and patience, but other tools are mediocre, may strike out too much to hit for average.

10) Mario Martinez, 3B, Grade C+: Considering B- based on projection. Worried about low walk rate but very young.

11) Mike Carp, 1B, Grade C+: Power and patience, acquired from Mets, but track record is a bit erratic and scouts give mixed reports.

12) Mike Wilson, OF, Grade C+ Murders lefties, strong power, has some fielding ability too, strikes out a lot. Could be good platoon hitter.

14) Joshua Fields, RHP, Grade C+: I’m assuming he will sign. Stuff is here, but what about command?

16) Matt Tuiasosopo, 3B, Grade C: I think he can be a useful role player, but doubt he will hit enough to start.

20) Steven Hensley, RHP, Grade C: Another interesting college pitcher from 2008 draft, I think he could surprise if command sharpens up a bit more.

The big trade with the Mets provides a quick boost for his list, adding a bit of depth to a system that needs it.

This system has considerable high risk/high reward talent. Halman and Triunfel are the epitome of that on the position player side, and Saunders, , DeJesus, and all fit that category too. These guys could develop into stars, or nothing, or anything in between. The pitching has depth in live arms at the lower level, but most of them needing more development time. The Aumont/Ramirez/Pineda trio could be special….but remember the fates of other pitching prospect aggregations. The attrition rate of such arms is very high.

The Mariners have put a lot of money into and will keep doing so, but it will be interesting to see if the new regime modifies their draft philosophy.