Share All sharing options for: Pittsburgh Pirates Top 20 Prospects for 2009 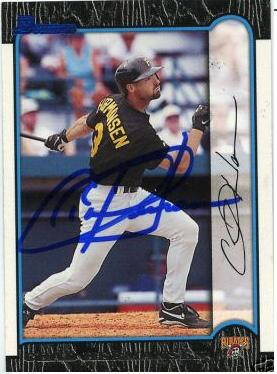 Age relative to league isn't everything. . .

1) Pedro Alvarez, 3B, Grade A-: If things turn out the way they should, no one will remember the contract hassle with . Has superstar hitting ability if he stays healthy and doesn’t lose the strike zone.

2) Andrew McCutchen, OF, Grade B+: Power has been a bit disappointing, and he still needs more polish on the bases, but defense is coming along and he’s improved his plate discipline. Still very young, you can still make an A- case.

3) Jose Tabata, OF, Grade B+: I know people are starting to wonder about him, but he’s still extremely young, just one year out of high school in North American terms. If a 2007 high school draftee hit .348/.402/.562 in a 22-game late-season trial in Double-A, people would be salivating.

4) Bryan Morris, RHP, Grade B-: An aggressive grade from me, but I’m impressed by how well he did one year after TJ surgery.

5) Daniel McCutchen, RHP, Grade C+: Looks like he could be a nice fourth starter, but possibly more dominant if used in pen.

6) Neil Walker, 3B, Grade C+: Slippage in strike zone judgment is worrisome, but he’s still quite young and adapted well to third base. When Andy LaRoche gets hurt again, could have a brief window of opportunity before Alvarez is ready.

9) Robbie Grossman, OF, Grade C+: Very toolsy, could be a Seven Skill guy if he maintains the patience he showed in very brief rookie ball trial. High ceiling, could rank much higher a year from now.

10) Jim Negrych, 2B, Grade C+: I don’t completely buy into the Carolina League power spike, but he should continue to hit for average.

11) Shelby Ford, 2B, Grade C+: Scrappy second base type, does a lot of things right though his tools are just average.

12) Matt Hague, 3B, Grade C+: He always hit in college, and he’s hit great as a pro, too. Will probably move to the outfield. An overlooked sleeper.

14) Brian Friday, SS, Grade C: I like the glove and the hustle, but am concerned about bad back and lack of power.

15) Quinton Miller, RHP, Grade C: Very high ceiling guy, hasn’t pitched yet but scouting reports are strong. Baseball Prospectus’ Kevin Goldstein likes him a lot, and Kevin has a good eye for guys like this.

17) Donald Veal, LHP, Grade C: Rule 5 guy from Cubs. Change of scenery and move to relief may do him a lot of good.

18) Brad Lincoln, RHP, Grade C: I’m afraid he might be the next Bryan Bullington, but it is too soon to give up. Needs another year past TJ to be sure.

19) Dan Moskos, LHP, Grade C: He pitched much better in the bullpen in August. Could make a really good LOOGY or maybe even a closer, but it is not his fault that the Pirates picked him instead of Wieters.

The Pirates system is quite thin, but showing signs of improvement.

During the Dave Littlefield years, they avoid heavy investment in the draft and usually went with polished, cheap college guys, unfortunately without a lot of success. The killer was the choice of Moskos over Wieters in 2007. The new regime put a lot more money into the draft in ’08, going after guys with questionable signability but higher upside like Grossman, Freeman, Miller, and Cunningham. At the same time, they also mixed in college types like Mercer, D’arnaud, and Hague.

I like that approach. I think the best way to build a farm system is to mix both college players and high school players, guys with skills and guys with tools. Concentrating on one type of player to the exclusion of others is just asking for trouble. The Pirates went too far in the “polished” player direction under Littlefield, but I was concerned they might go too far in the “raw tools” direction under . If the ’08 class is any indication, they are trying to find a balance, which is good news. It will take time, but it will pay dividends.

In any event, the system as it stands now has three potential impact guys at the top, then a whole bunch of guys who could be good role players or are just too far away to tell yet.