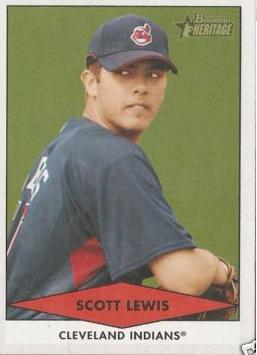 Scott Lewis was drafted by the Cleveland Indians in the third round in 2004, from Ohio State University. He had had Tommy John surgery in 2003, but made a rapid recovery. His fastball was in the 87-92 range, but his curveball was rated as a plus pitch. He fanned 13 in 5.2 innings of work for Mahoning Valley in the New York-Penn League after signing. I gave him a Grade C+ in the 2005 book, noting that Lewis could end up being a very astute pick if his recovery continued to go well.

Lewis had another injury setback in 2005, slipping on some ice over the winter and hurting his shoulder. He pitched in just 15.2 innings for Mahoning Valley after rehab, posting a 24/6 K/BB with a 4.60 ERA. I gave him a Grade C, concerned about his health status, but noted that his grade could go a lot higher if his arm was OK.

Lewis was kept on a strict pitch count in 2006, making 26 starts for Kinston in the Carolina League but pitching just 116 innings. His velocity was down into the mid-80s, but he was very effective, posting a 123/28K/BB with a 1.48 ERA. He improved his changeup and continued to show excellent command. I gave him a Grade C+ pending some Double-A data and concerns about his stamina.

2007 saw Lewis move up to Akron in the Eastern League, continuing to pitch well with a 3.68 ERA and a 121/34 K/BB in 135 innings, 135 hits allowed. I rated him again at Grade C+, noting the fine command and deceptive delivery, but worried still that his mediocre velocity would be a problem in the majors.

Lewis worked mostly with his fastball in the majors, throwing it 66% of the time. He threw his changeup 18 percent of the time, but his previously-excellent curveball, which has regressed compared to earlier in his career, was only thrown 8% of the time. Likewise his new slider at 8%.

What does the future hold? Cleveland fans and fantasy owners want to know if Lewis is the next Jamie Moyer or the next Jeremy Sowers. The answer is, I don't know. As much as I like his command and pitchability, the fly ball ratio is a warning flag, and he'll have to be perfect to make it in the majors. Durability is also still a concern. Grade-wise, I think I will give him a Grade B- in the book this year. He will be in the rotation mix for '09.