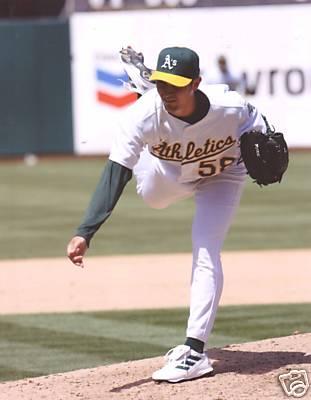 Justin Duchscherer was drafted in the eight round in 1996 by the Boston Red Sox, out of high school in Lubbock, Texas. He was considered to be polsihed for his age, but didn't throw particularly hard and that kept him out of the earlier rounds. He posted a 3.13 ERA with a 45/14 K/BB in 55 innings for the GCL Red Sox, a fine pro debut. This was way before I wrote about short-season guys, but a pitcher like that now would get a Grade C/C- type rating, as a kid who throws strikes but might not have as much oomph as he needs to survive at higher levels.

Duchscherer split 1997 between the GCL again, posting a 1.81 ERA with a 59/17 K/BB in 45 innings, and Michigan in the Midwest League, where he struggled in four starts (5.63 ERA, 19/10 K/BB in 24 innings, 26 hits). His grade would remain the same...good polish and feel for pitching, but not great velocity, and with shaky numbers in his first brief look at full-season ball.

Promoted to Double-A Trenton in 2000, Duchsherer had a solid year with a 3.39 ERA and a 126/35 K/BB in 143 innings, allowing 134 hits. His velocity picked up a hair, but was still average. However scouts noticed his ability to change speeds and throw strikes with his cutter, curveball, and changeup, and the fact that he made a successful Double-A transition was very positive. I gave him another Grade C in the 2001 book, though you can make a case it should have been C+.

That didn't quite pan out, as the Rangers traded him to Oakland in spring training 2002 for Luis Vizcaino. Duchscherer struggled with a 5.57 ERA and 73 hits allowed in 63 innings for Triple-A Sacramento, having injury problems and not adjusting well to the Pacific Coast League, though he did post a 52/17 K/BB. I cut him from the 2003 book for space reasons, but he'd be back down to Grade C rating.

He rebounded in 2003 with better health, posting a 3.12 ERA with a 103/15 K/BB in 138 innings for Sacramento, then pitching well in three starts for Oakland (3.31 ERA, 15/3 K/BB in 16 innings). I gave him a Grade C in the 2004 book, writing that I could see him "developing into a nice number four starter" but that he could also "get clobbered" if his command was less than perfect, and that there was really no way to know which way it would go.

As you know, Duchscherer was used as a reliever from 2004 through 2006 with excellent results, before an injured hip in '07. The hip bothered him again in 2008 and shut him down early, though he performed very well as a starter when he was on the mound. This is a case of a guy with a marginal fastball who made good due to tremendous command and pitching instincts. He needed some time to adjust early in his career, but when given the opportunity to succeed, he did so.